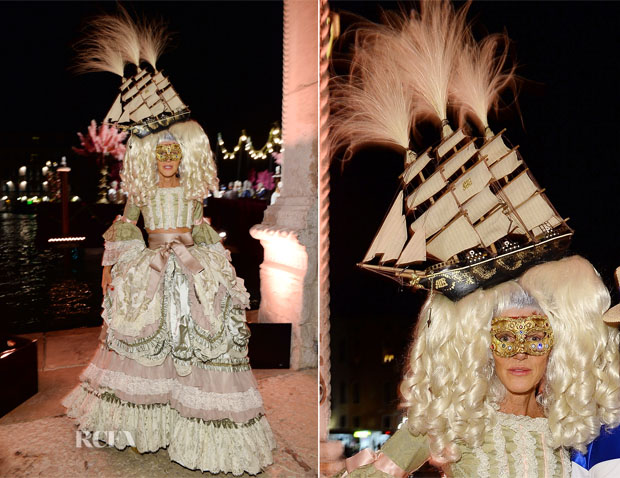 Leave it to drama kings Domenico Dolce and Stefano Gabbana to top off the recent haute couture shows with an elaborate flourish. The design duo orchestrated ‘Ballo in Maschera,’ an extravagant Venetian masquerade ball held in the halls of the historic Palazzo Pisani Moretta along the Grand Canal last Saturday. A collection of brilliantly costumed guests, each having received a mask created by the designers, arrived by gondola or boat to celebrate the Dolce & Gabbana Alta Moda Fall Winter 2013/14 presented in Venice, Italy.

Anna Dello Russo: ‘Understated’ is not in this ‘Vogue’ Japan editor’s vocabulary, so it’s only natural that she put the costume in this costume party with a spirited ship fascinator atop her expansive wig. Flaunting a period costume with layers and layers of ruffles and piles of frou, ADR was definitely the fashion queen of the evening. 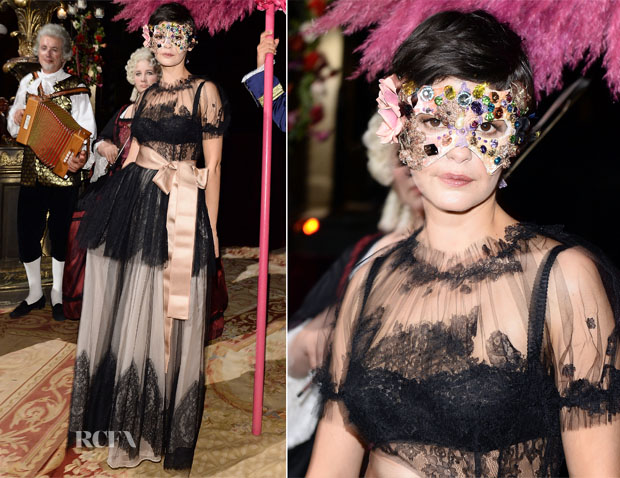 Audrey Tautou: The French actress was slightly less costumed, but she still stunned in a sultry-sophisticated Dolce & Gabbana gown, embellished with diaphanous black lace and finished off with a ballet-pink sash. A jewel-encrusted mask added a shock of colour and surprise. 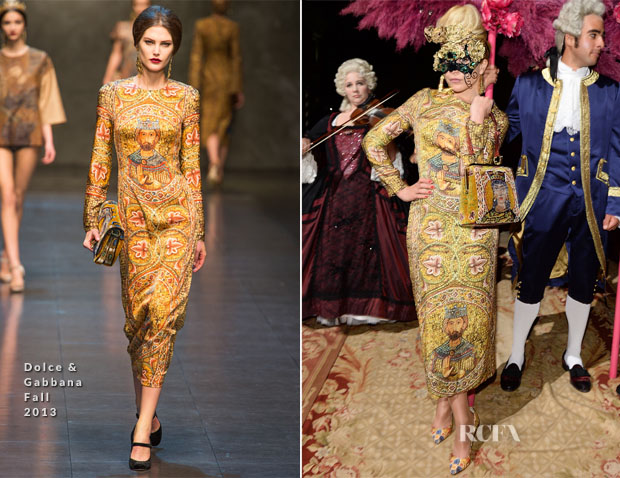 Paloma Faith: This British songstress was golden in an intricately gilded dress from Dolce & Gabbana’s Fall 2013 runway. The collection, inspired by Byzantine and Venetian cathedral mosaics, fit right in at ‘Ballo in Maschera.’ But Paloma’s asymmetrical, metallic floral mask and beehive hair really made this look sing. 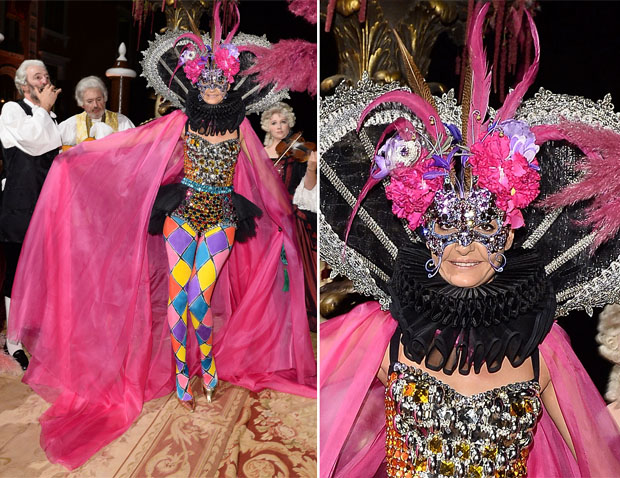 Giovanna Battaglia: Like ADR, Giovanna took a delightfully OTT approach with her grand entrance to the fête. Wearing a Dolce & Gabbana Spring 2012 crystal bustier, the fashion editor paraded out her lively court-jester regalia with a ruffled neck choker, multi-colour harlequin tights and a brandish of a bubblegum-pink cape. 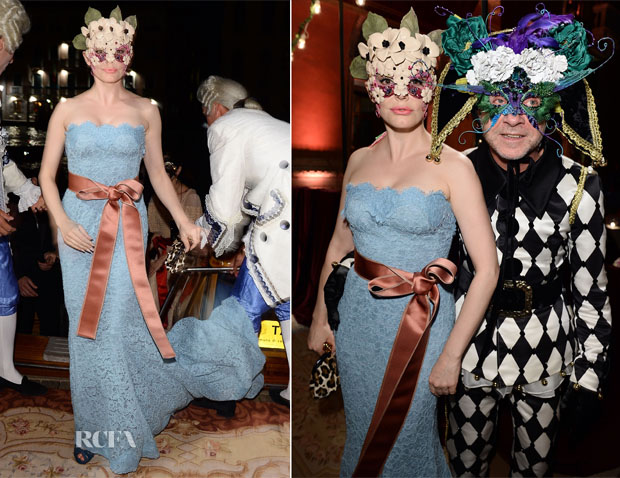 Rose McGowan: Walking a more subtle line, the actress was elegantly refined in a blue lace Dolce & Gabbana gown tied with a mauve ribbon sash, which was artfully finished with a field of blossoms on her mask. Standing aside her was a nearly unrecognizable Mr. Dolce himself, who was also decked out in full-on jester mode. (Mr. Gabbana, on the other hand, channeled his inner matador.) 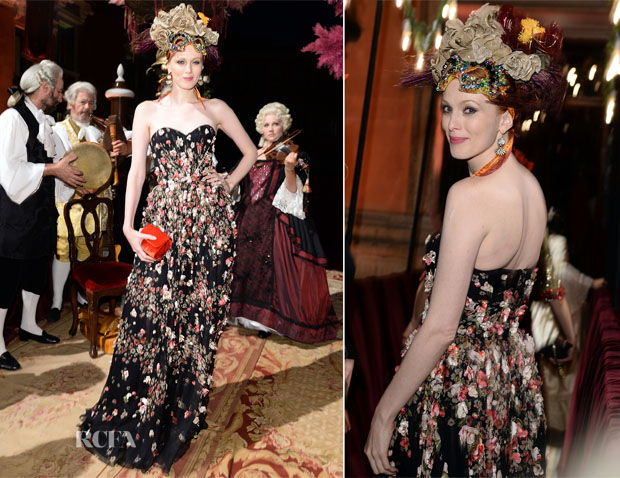 Karen Elson: The model joined the festive scene, florally festooned with a bounty of blooms on her black strapless Dolce & Gabbana gown that was sublimely ostentatious, with a side of extreme elegance. The garden continued on her rose-topped head. 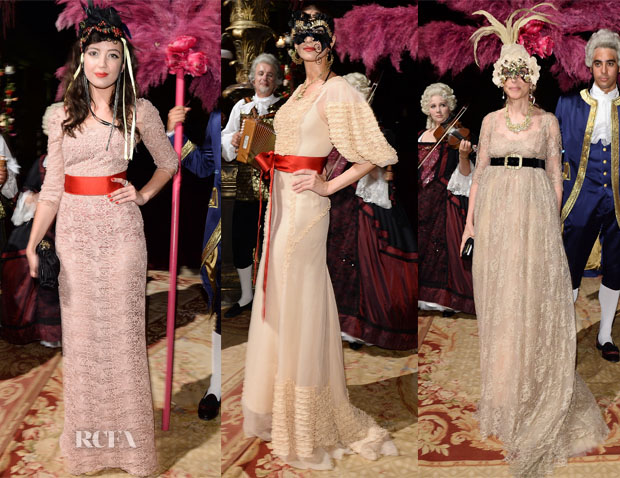 Daisy Lowe: The Dolce & Gabbana-donning model rocked a blushing lace dress that got a punch of masquerade flair with a streamer-accented mask and a red ribbon at her waist, which matched her crimson lippie.

Eugenia Silva: This statuesque lovely also had a model moment, strutting out a Dolce & Gabbana nude confection that featured exaggerated sleeves and tiers of light ruffles. Another red sash made an appearance, adding plenty of well-placed sizzle.

Franca Sozzani: Appropriately ornate, the ‘Vogue Italia’ editor also went nude, fitting right into the Venetian masquerade theme with her decorative lace gown by Dolce & Gabbana, cinched into an empire waist with a wide black belt and bronze buckle. An embellished cluster necklace and a plume of feathers topped off her look.