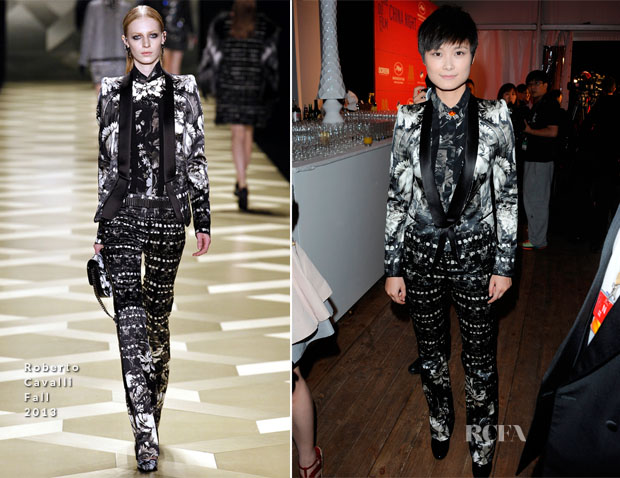 Li Yuchun came to our attention yesterday wearing a Gareth Pugh Spring 2013 Chinese-red ensemble, which appears to be the marmite look of Cannes so far.

She proved she wasn’t afraid of taking a risk, wearing a bold colour and an unusual design at the Chinese Party held later that evening; she proved that she’s not afraid of prints either.
It would appear that Li Yuchun’s red carpet M.O. is of an androgynous nature.

I could be wrong and she’ll hit the red carpet later today in a tulle ballgown, but at the party she rocked another menswear-inspired look, this time from the Roberto Cavalli Fall 2013 collection.
The black-and-white look featuring a jacket with satin lapels was ripped right off the runway with the exclusion of the shoes.

Someone not so bold – unless they are Karolina Kurkova or Solange Knowles – would’ve added black pants or a black shirt to break up the prints; however, Yuchun rocked it as it was intended.

I can’t wait to see more of her style. I have a feeling she’s the Tilda Swinton of China.

Li Yuchun In Gucci – The Fashion A...

Posted by Catherine Kallon on May 22, 2013 In: Li Yuchun, Roberto Cavalli, Runway To Red Carpet