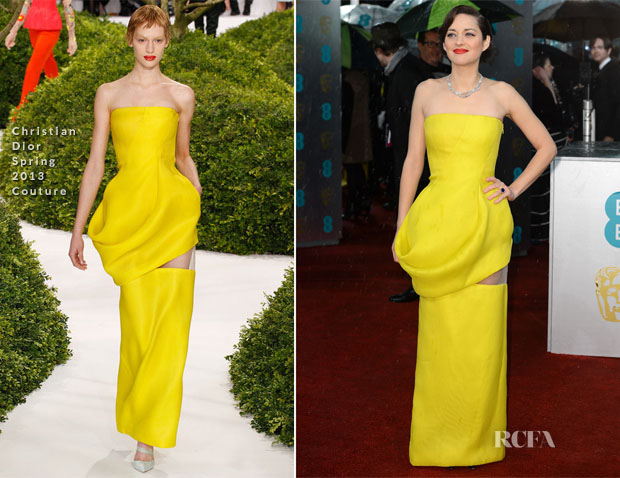 Engaging in somewhat of a red-carpet sprint, a visibly chilled Marion Cotillard battled the elements as she quickly posed amid umbrellas and photographers’ flashes at the 2013 BAFTA Awards on Sunday at the Royal Opera House in London.

After wearing a black-and-white cocktail dress from the Christian Dior Pre-Fall 2013 collection at the BAFTA nominees party, she played the Dior card yet again—except in far more dramatic fashion.

Wearing a confection from designer Raf Simons’ Spring 2013 Couture runway, the ‘Rust and Bone’ Leading Actress nominee made a true fashion-girl move; she even eschewed a shrug or overcoat to better show off the sunny yellow gown that could have cleared overcast skies with its radiant colour.

The billowing drape of the dress and the peek of skin from the sheer side panel brought the look into style-forward territory and made it a bit of a red-carpet risk.

The addition of a diamond necklace and Marion’s retro waves and red lip delivered a touch of old Hollywood glam. But I keep wondering if this look may have fared even better without the necklace.

You may recall that Jennifer Lawrence wore a navy gown from this collection at the 2013 SAG Awards.

Were you applauding for Marion’s entrance, or did it come apart at the seams?