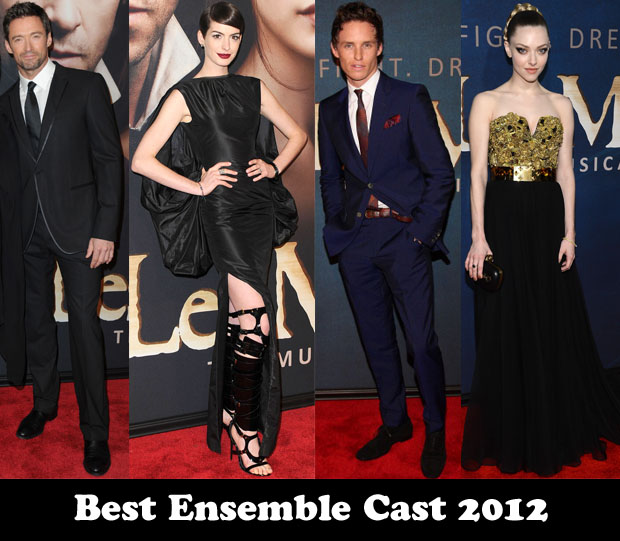 The ‘Les Miserables’ cast, including Anne Hathaway, Amanda Seyfried, Hugh Jackman and Eddie Redmayne, have taken the red carpet by storm, parading out looks as dramatic as their roles in the movie, which is already garnering a crush of awards buzz.

While the flick has been nominated for top nods by Screen Actors Guild and Golden Globes voters (with Oscar on the tip of everyone’s tongue, too), the actors are already winners in the fashion category for Best Ensemble Cast 2012.

From Tokyo to London and New York City premieres to late-night talk shows and promotional luncheons, this ensemble has struck pose after pose. While Hugh and Eddie cut handsome profiles in such labels as Lanvin, Alexander McQueen and Burberry Prorsum, leading the way were Anne and Amanda, who deserved the most attention. (No offense, guys.)

Both actresses stepped up their style game with pretty and provocative looks that pushed the boundaries.

Amanda and Anne, respectively, trotted out a floral-print Brood and an edgy Antonio Berardi in Tokyo, then a ruffled Balenciaga and embellished Givenchy Couture in London, both to mixed review. Anne’s sleek after-party look by Altuzarra was redeeming.

But just as in a good screenplay, a bit of scandal is always a bonus. And in NYC, the starlets delivered the shock factor with complementary confections that were dark, mysterious and slightly goth.