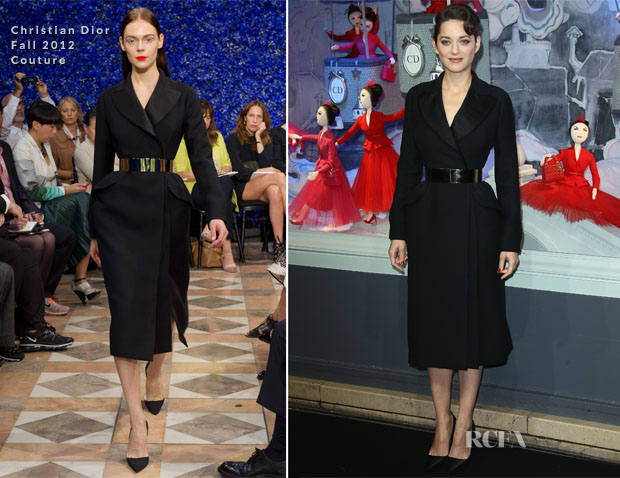 On Friday evening, Marion Cotillard had the honour of turning on the Christmas lights at Printemps Haussmann in Paris, France.

The actress wore her third Christian Dior look of the week; on this occasion she donned a black wool coat from the Fall 2012 Couture collection.

Many of you are o.v.e.r Marion’s continual Dior run.

We all know she’s the face of the Dior and has been for some time, but this non-stop Dior fest is a bit much, and is starting to feel very much like a chore.

We have had a few breaks where she wore Azzaro and McQ Alexander McQueen, but surely her contract with the fashion house should allow her a little more variety before her red carpet look becomes stale.

You may remember that LeeLee Sobieski wore a similar red version of this look last month to the Dior Spring 2013 fashion show in Paris.

The red would’ve been a far more interesting choice for Marion, who has worn mostly black Dior looks.

When it comes to Marion and Dior do you feel like ‘give us a break’, or ‘keep it coming’?