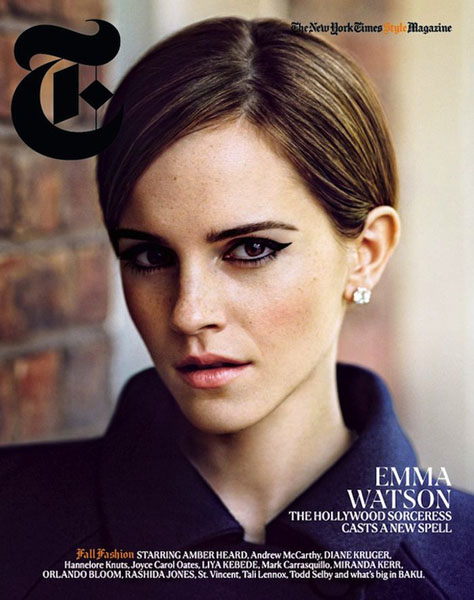 I’m excited that we will see Emma back on the red carpet again soon, as she will be promoting her new movie, ‘The Perks of Being a Wallflower’, set to hit theatres on September 21.

She talks to the mag about her American accent, on why she didn’t work on other films during Harry Potter, and the numerous movies she currently has in the pipeline.

You can read some extracts from the interview below, or go to The New York Times “T” Style Magazine to read more.

On honing her vowels when it comes to her American accent: “My grandma said — when I was really young and I’d sing along to the radio — why do you sing in an American accent? I guess it was because a lot of the music I was listening to had American vocalists. And that was something Steve said to me as well: try singing the lines in an American accent. That kind of opened me up. Then I worked with a dialogue coach and I just put in the time to really, really listen and just go over it and over it and over it until I could do it without thinking about it too hard. And I just knew it was really important.”

On her decision to wait so long to make other movies aside from ‘Harry Potter’: “I think at first I didn’t because I was always either studying or filming, I didn’t have time to go off and do other films or other things to sort of show people that, Oh, she is not just Hermione, she is an actress and she can go and do these other parts and roles. . . . I didn’t, because I was so focused on, you know, on my GCSEs and on my AS and on my A-levels and then getting in to university and then whatever, I didn’t really have time to do any of that.”

On her collegiate experience at Brown: “My first two years at Brown weren’t easy, not because I was bullied or because anyone gave me a particularly hard time, but just because, you know, without the collegiate system . . . and at Brown everyone does completely different things and very much chooses their own path, which is great, but it’s also much more difficult, too. You’re not with a group of people all the time at one time.”

On juggling multiple roles as of late: “I guess weirdly in my head I knew what I wanted, I didn’t know how it would or if it would ever happen. But before ‘Bling Ring,’ I said I’d really wanted to meet Sofia Coppola and — this is before I knew that she had a film in mind — ended up meeting her. And Darren was someone who actually I met a good year ago. And then I’m doing a film with Guillermo [del Toro] next summer, and I went to him and said Warner Brothers have given me the script for ‘Beauty and the Beast,’ but the only way I’d really want to do it is if you did it. And then miraculously he said, ‘Oh, funnily enough ‘Beauty and the Beast’ is my favorite fairy tale, I can’t let anyone else do this, I’ll start putting a team together.’”

Bella Thorne In BCBG Max Azria – 2012 Do Something Awards

Olivia Munn In Alice + Olivia – 2012 Do Something Awards

Posted by Catherine Kallon on August 20, 2012 In: Emma Watson