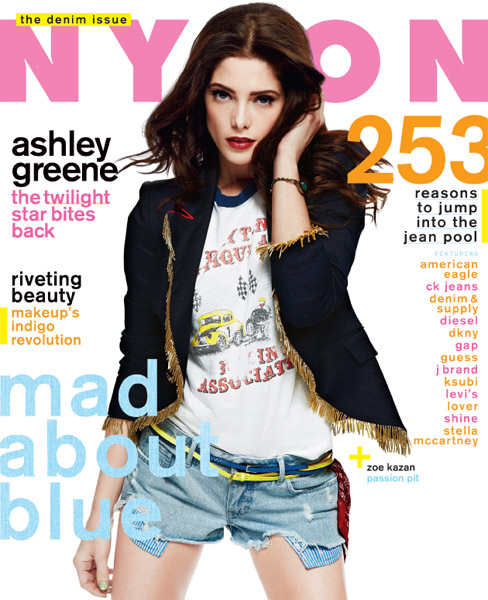 Before the big promotional tour for The Twilight Saga: Breaking Dawn – Part 2, the actress The 25- is beginning promotion for her new movie The Apparition which is set to hit theaters on August 24.

For the denim issue the pretty actress wears a mixture of designer and high street pieces throughout her editorial, from vintage Moschino and Ralph Lauren to True Religion and Topshop.

The face of DKNY talks to the mag about her career and her plans post-Twilight, her modelling days, dating and the paparazzi.

On her past modeling days: “I knew I was never going to be a supermodel. I mean, I’m 5’5″—it’s not going to happen unless you’re Kate Moss, which I’m not. And until you hit a certain level in the modeling world, it’s really rough: You’re never tall enough, you’re never thin enough, there’s always another girl. It just wasn’t for me anymore.”

On her instant Twilight stardom: “Right when I was cast, my IMDb STARmeter [a chart that tracks actors based on how many searches are done on them] went through the roof—all of ours did, and we hadn’t even done anything yet! Now I have to remind myself that not everything is always going to be like that.”

Twilight producer Wyck Godfrey on Greene’s portrayal of Alice Cullen: “Alice may be one of the most beloved characters of the books, and Ashley brought her ebullient personality to the role immediately. There’s a bubbly, half-crazy aspect to Alice that’s so infectious. Ashley has always been able to tap into that. She’s unsinkable.”

On dating and the paparazzi: “Imagine going out with a girl one night, then the next day she’s like, ‘We’re hooking up! This is serious!’ It’s this overload of someone saying, ‘This is what this is, even though we’ve only been on one date and I don’t even know your middle name.’ Everything has a title immediately.”

Posted by Catherine Kallon on July 25, 2012 In: Ashley Greene