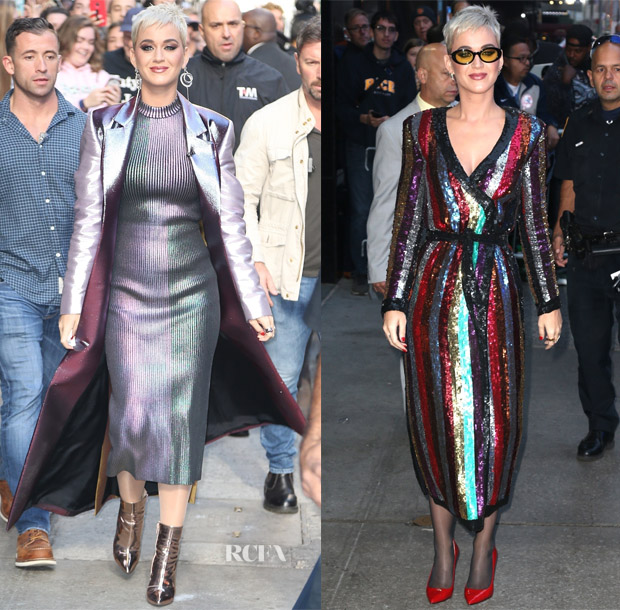 As one of the new ‘American Idol’ judges, Katy Perry was on ‘Good Morning America’ on Wednesday (October 4) in New York City.

The entertainer offered up a double-feature of colourful looks to wake us up in the morning.

Upon leaving the ‘Good Morning America’ studios, she wore a Christopher Kane Fall 2017 body-con, ribbed dress and matching coat that provided a dizzyingly fanciful swirl of holographic-inspired hues, which actually were a brilliant counterpoint to her ice-blonde pixie cut. Her metallic booties and sculptural earrings added to the futuristic whimsy of the look.

But, even before her Christopher Kane look, she was rocking another bright-and-early morning look.

Upon arriving to GMA, she dazzled in an Attico Fall 2017 all-over sequin wrap dress in rainbow shades—clearly even needing Elizabeth and James McKinley shades to shield her eyes from the glitzy glare. To polish off the glam look, she styled the dress with Katy Perry Footwear ‘Microphone’ pumps for an added flourish—although I would have skipped the tights here.

You may remember that Kat Graham wore this same dress back in August. 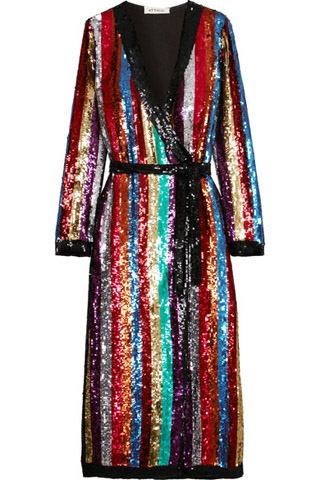