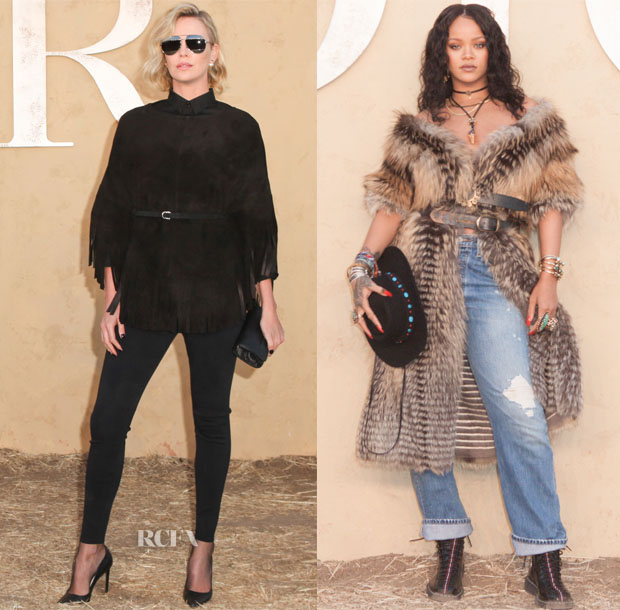 A long list of lovelies were seated in the front row for the Christian Dior Cruise Fall 2018 presentation, which was held on Thursday (May 11) in Malibu, California. Naturally, all were wearing top-to-toe Dior for the occasion.

Charlize Theron: With a sleek monochromatic look, Charlize debuted a Dior black suede jacket with fringe from the Cruise 2018 collection for a certain western prairie-informed elegance. 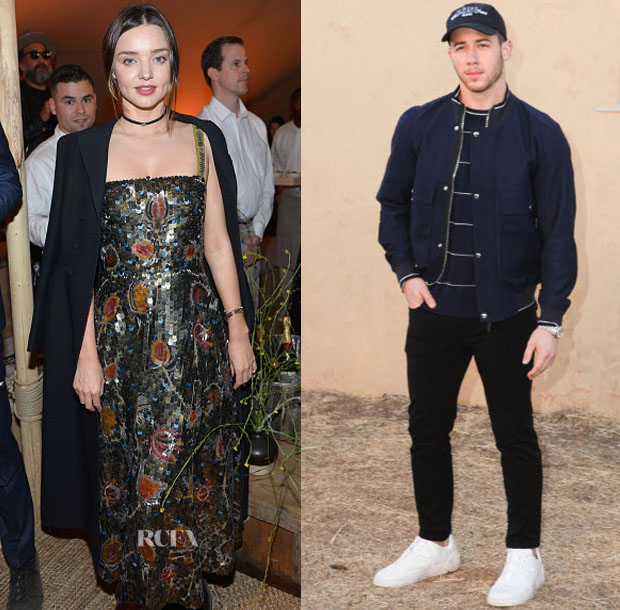 Miranda Kerr: The supermodel offered up significantly more sparkle in her Dior printed, embroidered dress from the Cruise 2018 collection that maintained the Dior-branded bra strap look. I love the deep richness of colour hue enhanced by the glimmer of all-over paillettes.

Nick Jonas: The singer was team Dior Homme, as he cut a sporty profile in his navy bomber jacket and black jeans, topped off with a Dior baseball cap. 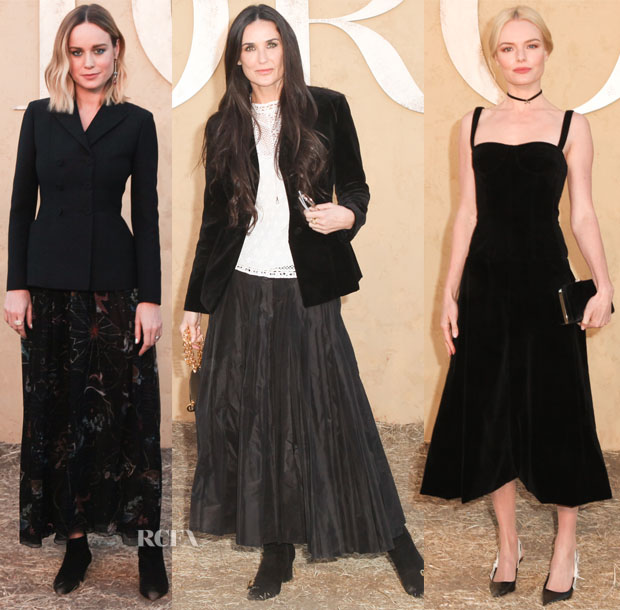 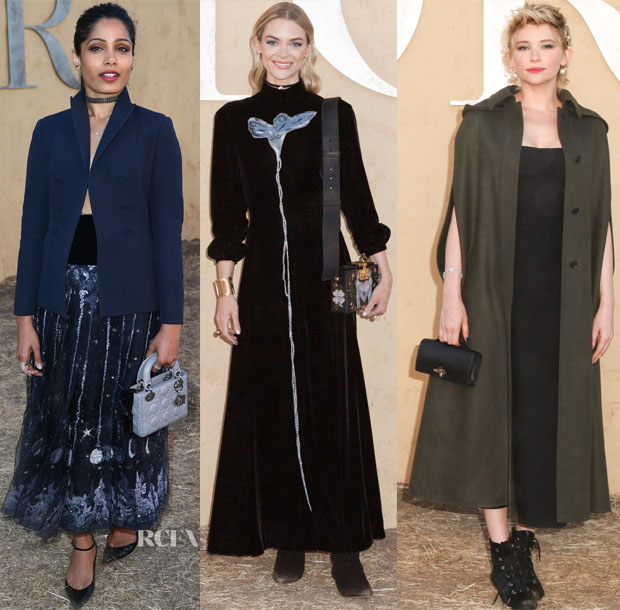 Frieda Pinto: With a bra top serving as her underpinnings for the navy blazer, Freida’s look offered a sultrier edge. But I wish the wide black waistband of the starry, embellished skirt had been less prominent.

Jaime King: Leave it to Jaime to make a rather conservative long black dress come alive by echoing the whimsical spirit of its long flower in her statement handbag and gold-flecked jewels.

Haley Bennett: The cape-like, forest-green overcoat was a nice touch of casual drama for the simple black dress underneath, but I was in love with the bright, watermelon hue of her lipstick. 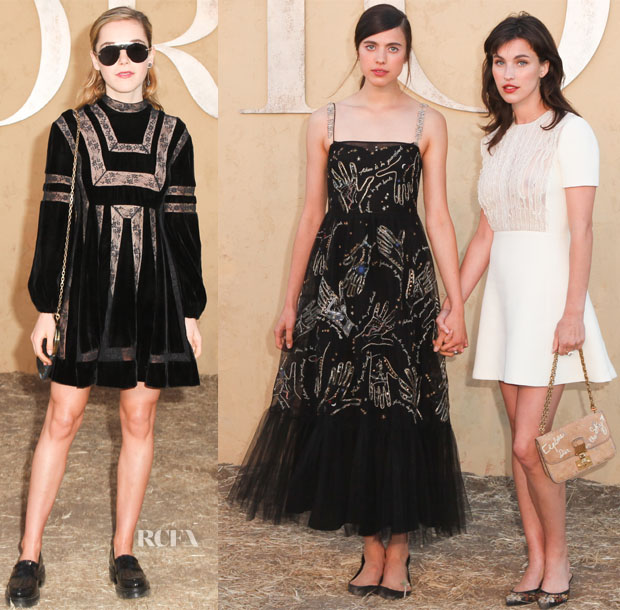 Kiernan Shipka: Mixing a girly take on medieval dressing with schoolgirl charm in the patent loafers and a mod spin on classic aviators, Kiernan combined styles to notable effect.

Margaret Qualley: I was enchanted by the ease with which Margaret wore this whimsical, palm-reader tulle frock, with flats necessary for the location of the show.

Rainey Qualley: No lining, no problem for Rainey who put the girls on display in this sheer-front, cream frock that wasn’t quite as demure as it might have seemed. 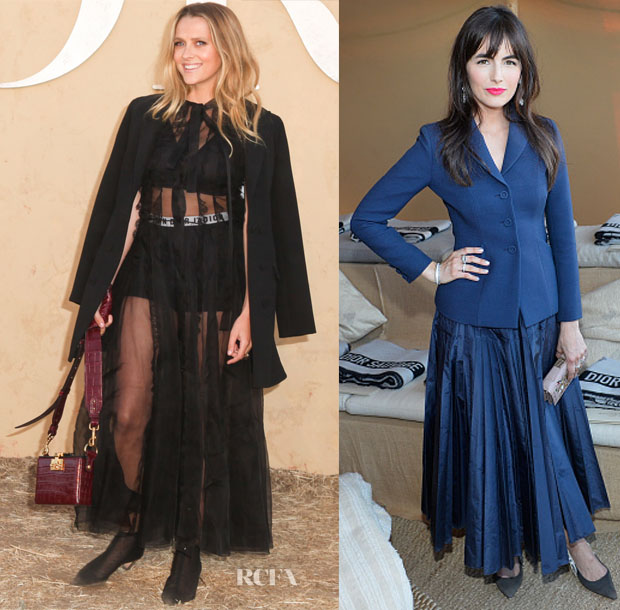 Teresa Palmer: With the ubiquitous Dior briefs in play, this sheer look just had one too many things going for it with the blazer, the burgundy purse, and that sock-like footwear.

Camilla Belle: The intense blue hue is what sold this look to me; that, and Camilla’s brilliant neon-pink lip. 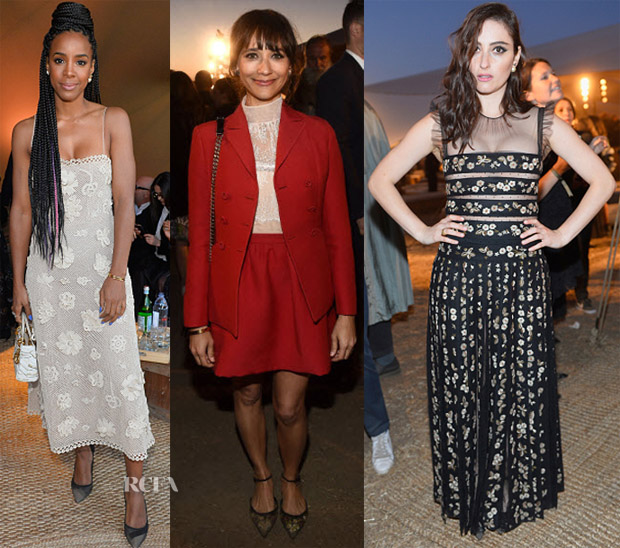 Rashida Jones: Despite the saturated red hue of this ensemble, it fell a bit flat for me. I don’t think the velvet turtleneck underneath was the best choice.

Banks: Opting for a simplicity of styling, Banks let the plisse-fueled movement of her metallic, floral-patterned dress do the talking.

Allison Williams In Greta Constantine – ‘Get Out’ Garden Party