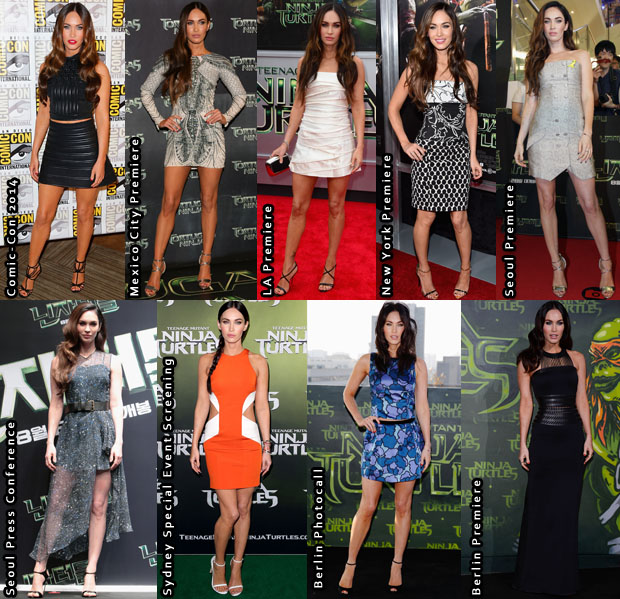 If Megan Fox had a motto for her ‘Teenage Mutant Ninja Turtles’ promo tour, I’m sure it was ‘the shorter the better’, with only two of her nine red carpet looks falling below the knee.

Kick-starting her promo tour at Comic Con back in July, the actress would’ve had the loveable comic geeks in a tizzy upon sight of the leggy brunette wearing a sexy David Koma leather-accented two-piece look.

She smouldered once again in Mexico City in a Zuhair Murad mini dress before wearing a layered mummified Marc Jacobs dress to the LA premiere, which didn’t quite have the grand homecoming feel I was expecting.

On to New York, where the hemline was longer and the style more elegant in Oscar de la Renta.

Sultry Megan was out to play again for the Seoul premiere in a snakeskin print Jenni Kayne frock before wearing my least favourite look at the photocall, a galactic-print Jonathan Saunders frock.

Megan made a bold statement in Cushnie et Ochs in Sydney before heading to Europe for the Berlin photocall wearing a two-piece colourful blue print Marc Jacobs design.

Going out with a bang, and wearing the only gown of the promo tour, she finished in what she stared with – a sexy black design with leather accents courtesy of David Koma.

My favourites were the David Koma gown followed by the Oscar de la Renta.

Megan Fox Was Smoldering In Black For Th...

Get The Look: Megan Fox’s Ferrari&...