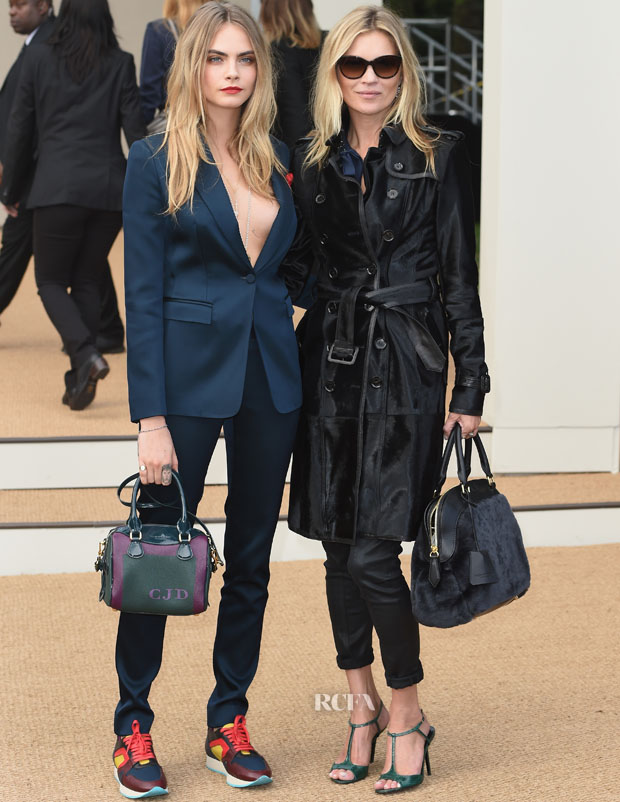 A crush of beauties, and a handsome boy, were out in force for the Burberry Prorsum Spring 2015 fashion presentation on Monday (September 15) during London Fashion Week in London, England. This front row set was, of course, outfitted in all measures of the powerhouse British label for the big show.

Cara Delevingne: The model was front and centre—on the FROW instead of the runway—where she strutted out a sexy two-piece navy suit with multicoloured Burberry Prorsum sneakers and a contrasting plum Burberry Prorsum ‘Bee’ monogrammed bag, both fresh from the Spring 2015 collection. The unexpected mix of the skin-baring, bra-less plunge, worn with strands of necklaces, and the sporty appeal of the trainers delivers on Cara’s rebel edge. I can’t say that a part of me didn’t want to see the suit with a pair of heels, though. The matching red lip and red pocket square were amazing.

Kate Moss: Arm in arm with Cara, Kate belted on a sleek black trench over cropped black skinny pants, punctuating the look with teal-green heels, the Burberry Prorsum ‘Bloomsbury’ bag and cat-eye shades. This dynamic duo appear together in the current My Burberry fragrance campaign—talk about a perfect model match. 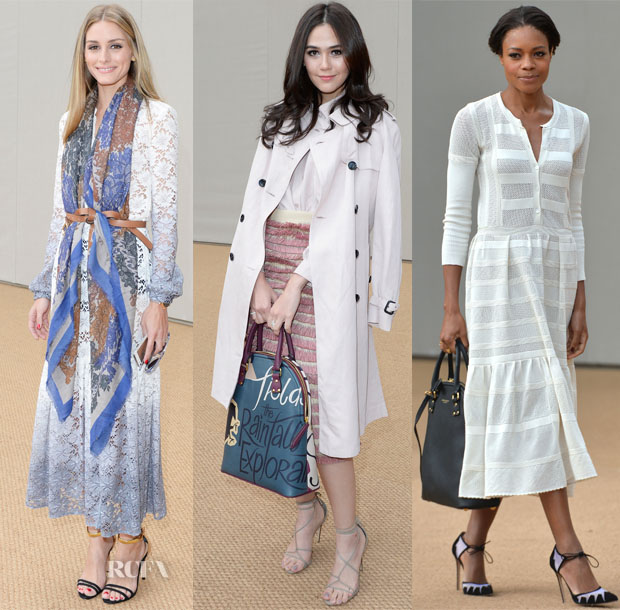 Olivia Palermo: The fashion girl wore a signature Olivia look, with the breezy, ombre-effect Resort 2015 lace dress receiving the flourish of a printed scarf that she added for impact. Black ankle-strap sandals wouldn’t have been my first choice for the lighter, bohemian nature of this ensemble.

Araya A. Hargate: Donning a Resort 2015 fringe skirt with a barely blush trench and dove-grey sandals, the Thai actress put some punch in the pastel colour story with her Burberry Prorsum ‘Bloomsbury’ statement bag. We usually see Araya sweeping around in gowns during Cannes; do you like her daytime look?

Naomie Harris: With her bun-style updo and this white Resort 2015 tiered dress, the effect was more prairie girl than necessary. It was also a bit aging. On the bright side, her Bionda Castana heels had plenty of sultry attitude unlike the rest of the outift. 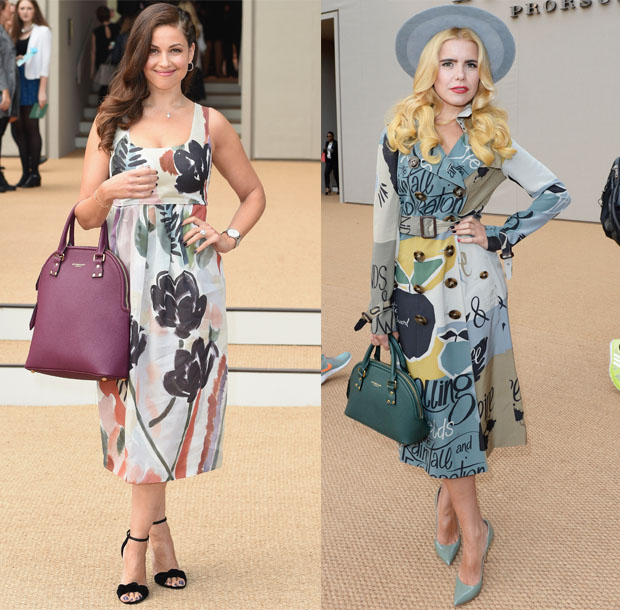 Paloma Faith: Always impressing with her sometimes eccentric, yet inspiring style, Paloma coloured outside the lines just a bit with her Resort 2015 statement trench that echoed the print on Araya’s bag. The accessories are what really made this trench tick, though, with a small Burberry Prorsum ‘Bloomsbury’ teal bag, mint-green pumps and a blue chapeau, not to mention a cascade of blond curls, all working in contrasting harmony. 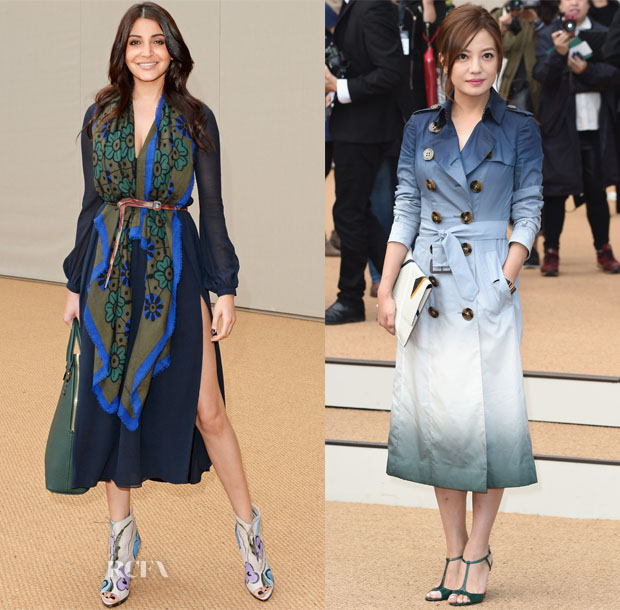 Anushka Sharma: The Indian actress worked a navy Fall 2014 side-slit dress, patterned scarf and printed booties to her advantage, finishing the ensemble with a green Burberry Prorsum ‘Bloomsbury’ bag. Defying style logic, this somehow all comes together, even with the bold, contrasting booties. A sexy-sophisticated dress, graphic scarf and playful shoes spells fun and fashionable.

Vicki Zhao: I would have liked this Resort 2015 ombre trench and oversized envelope clutch far better if the coat was not wrinkled. Kate’s green sandals topped off the look. 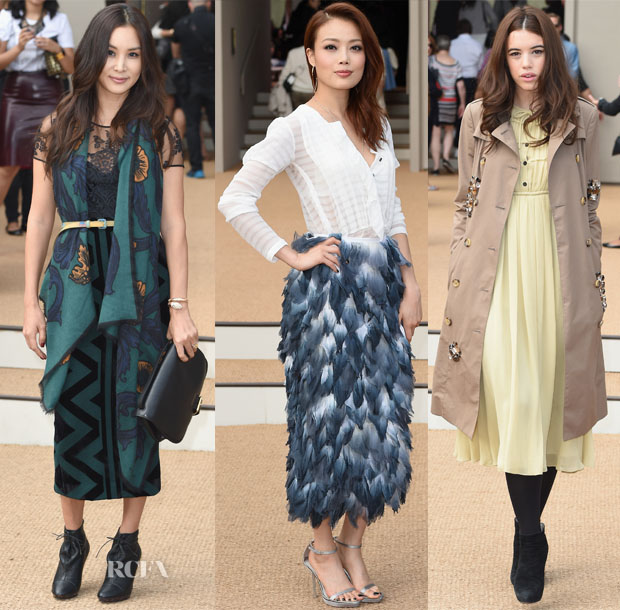 Ko So-young: The South Korean actress also opted for a scarf-centric Fall 2014 look, hers a medley of graphic prints, from the geometric patterned dress to the exploded filigree-style long scarf. Black drawstring booties and a big clutch finished the look.

Joey Yung: Everything was coming up feathers for the Asian star who wore a Resort 2015 look consisting of a sheer white top, dark stormy blue skirt and silver sandals.

Gala Gordon: The starlet covered up in a Fall 2014 pastel-yellow chiffon dress paired with an embellished taupe trench and black booties. I perhaps could have done without the black tights, but then again, they softened the blow of the stark, heavy footwear. 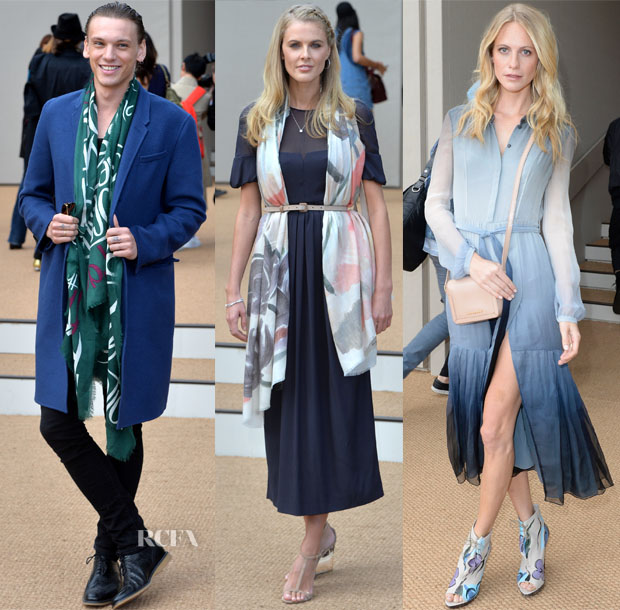 Jamie Campbell Bower: The British hot shot was seated front-row in support of his model-girlfriend Matilda Lowther who walked in the show. Of course, he drew plenty of stares himself in a cobalt-blue long coat and contrasting green, letter-print scarf.

Donna Air: Elevating her navy dress with a Burberry Prorsum Fall 2014 painterly pastel scarf, the British presenter still had one of the more basic, daresay matronly, looks of the day.

Poppy Delevingne: Taking a completely different style stance from her sister Cara, Poppy wore the best interpretation of smoky-blue ombre with this effortlessly chic Resort 2015 dress and crossbody nude bag. She fluanted the same Fall 2014 printed booties as Anushka, except hers were arguably more of a seamlessly cool companion to her look, without a hint of try-hard.