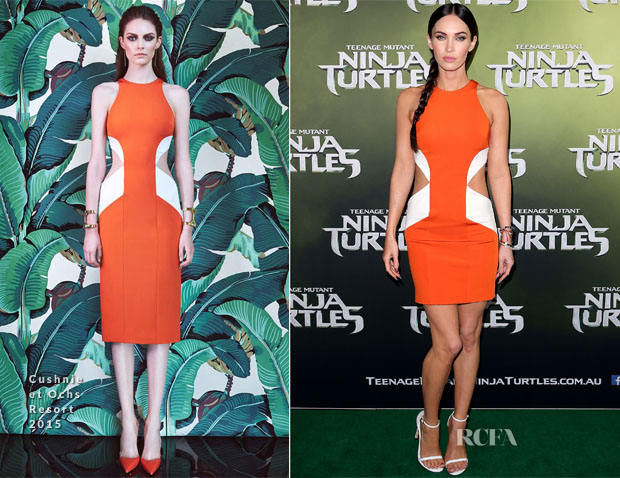 Continuing her promo of ‘Teenage Mutant Ninja Turtles,’ Megan Fox attended a special screening of the movie at The Entertainment Quarter in Sydney, Australia on Sunday (September 7).

Yes, this ‘Turtles’ tour has been characterized by the actress’s full-on embrace of short-and-sultry dresses, so it’s no surprise that Sydney saw another rendition of the same. Nor should it come as a shock that Megan raised the hemline on this Cushnie et Ochs Resort 2015 design several inches from its lookbook version.

Still, it’s difficult to deny the allure of this bold statement—from the vibrant orange and white colour-blocking to the label’s signature sexy cutouts lending a figure-flattering edge.

As for that glossy long braid, it can only be described as fierce.

I would have just changed out the white sandals for a nude pair, or even a matching pumpkin-orange pump seen on the model.