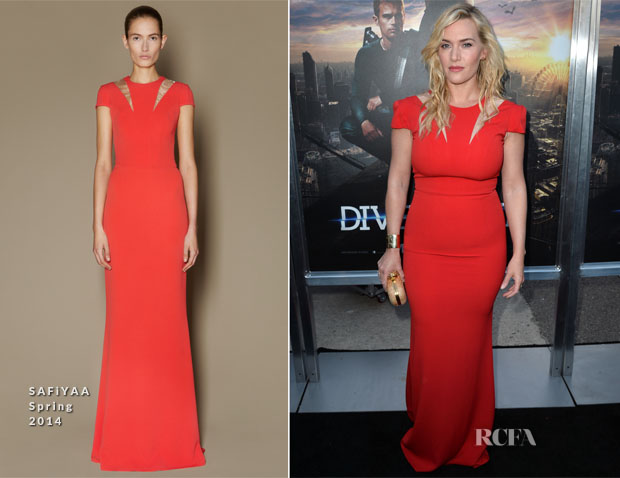 The British actress wore British brands exclusively, starting with her SAFiYAA Spring 2014 cap-sleeved red gown with gazaar inserts, which is a body-hugging beauty. I never tire of this silhouette on her.

A nude Alexander McQueen clutch may not have been my first choice with this look, but I would guess that the colour choice was to complement the gazaar inserts.

Not overdoing it with the jewels, she styled her look with Ana Khouri white-diamond-and-yellow-gold ‘Cone’ earrings and a yellow-gold Idelman cuff.

I’m delighted she didn’t wear her favoured black on this occasion. Red has always been her signature colour, or at least the colour which works wonders for her. It all started at the 2002 Oscars in Ben de Lisi, then who could forget her stunning red Elie Saab gown at the 2011 Emmys? For the ‘Carnage’ Paris premiere she kick-started the love for Stella McCartney’s illusion dress, and finally she also had a red maternity moment last year, wearing Jenny Packham to the ‘Labor Day’ London premiere.