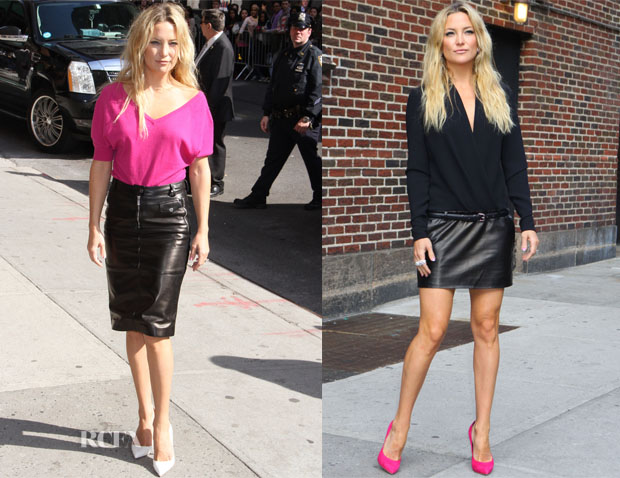 Kate Hudson was spotted arriving at the Ed Sullivan Theater in New York City yesterday afternoon for her guest appearance on the ‘Late Show with David Letterman’.

For her arrival she wore a Michael Kors Pre-Fall 2013 look, which featured a fuchsia-pink knit top and black plongé pencil skirt.

The white-shoe trend was kept very much alive with this look.

For show time, the actress opted to keep the pink and black elements of her first look going, wearing a Barbara Bui Fall 2013 drop-waist long-sleeved silk-and-leather dress, which she styled with fuchsia-pink Barbara Bui pumps.

Both looks were styled with barely there makeup and beachy waves.

I love the touches of pink in both looks, but the Barbara Bui wins me over here.

Which do you prefer?

Heidi Klum In Barbara Bui – Out In...