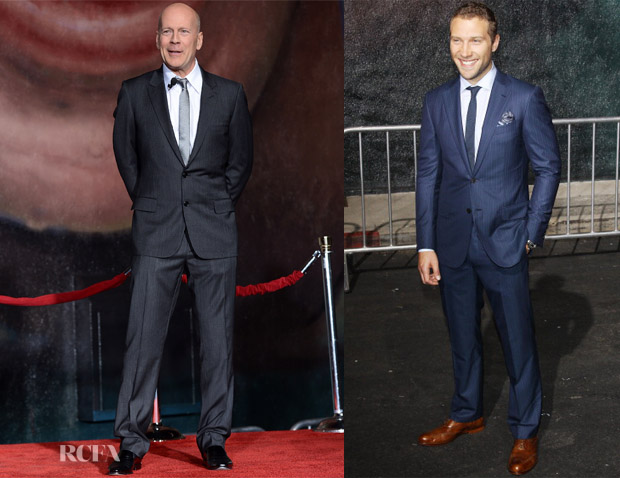 To celebrate 25 years of ‘Die Hard’ franchise, Bruce Willis, along with ‘A Good Day to Die Hard’ costar, Jai Courtney, attended a dedication event in Century City California on Thursday.

Bruce Willis: The face of the ‘Die Hard’ franchise donned a Dior Homme grey wool suit with peak lapels, matched with a silver skinny tie. Unfortunately for Willis, his skinny tie looks extra skinny next to his forward-point collar, and his pants were made for someone four inches taller.

Jai Courtney: His co-star on the other hand, looks exquisite in a perfectly-tailored Ermenegildo Zegna blue suit, paired with caramel-coloured shoes, a pocket square and an English spread collar shirt. Plus, his pindot tie adds some welcomed pattern to an eye-catching ensemble.

The two action stars can be seen taking up their roles as John McClane and John McClane Jr., respectively, in the franchise’s fifth installment, which will be released in theaters on Valentine’s Day.