Making her second appearance at Comic-Con 2012, Ashley Greene is sticking to her uptown girl style, whilst her co-star Kristen Stewart takes a less formal approach.

I wish her ivory boucle belted sheath dress had been a bit shorter. Just an inch or two to make it knee-length would’ve made a huge difference.

T-strap sandals with a crisscross detail from the same collection and a Brumani ring accessorized her look.

Do you think this look is too formal for Comic-Con? 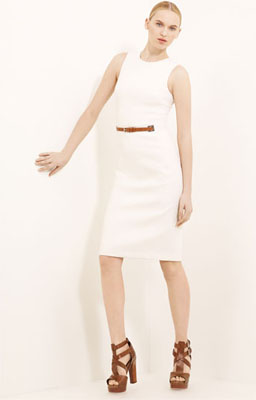 You can buy Ashley’s Michael Kors dress from Nordstrom.com and Saks.com.