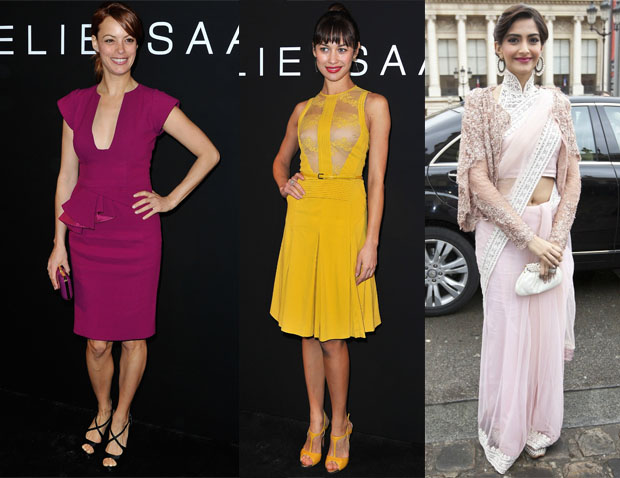 Bérénice Bejo: The Oscar-nominated actress took her front-row seat at Elie Saab’s Spring 2012 Couture show yesterday following a succession of red carpet appearances wearing the designer’s threads. On this occasion she wore a raspberry fitted Resort 2012 dress with a ruffled detail on the hip and a plunging neckline. She accessorized with a matching clutch and black YSL sandals. As an Oscar nominee and considering her front-row appearance, I think it’s safe to say that she’s most definitely going to be wearing Elie Saab on February 26.

Olga Kurylenko: The Ukrainian actress donned a vibrant yellow Elie Saab Spring 2012 dress with lace panels on the front. Like the runway model she also paired her dress with matching sandals.

Sonam Kapoor: I have featured the Indian actress many times since Cannes Film Festival and I’m more entranced with her with every look. She has worn a variety of designers, but on this occasion she proudly represented her heritage wearing a traditional sari by Deepti Pruthi. This look was paired with an Elie Saab lace shrug and bejewelled flats. When she swept into the venue, everyone near me was whispering, “Who’s that?” I told those sitting near me that she’s the “Angelina Jolie of India”. I’m not entirely sure if that is true, but she did command your attention much like Ms Jolie. I know I always say this, but she is even more beautiful in the flesh. She is also surprisingly tall, as most celebrities I meet are shorter than expected. 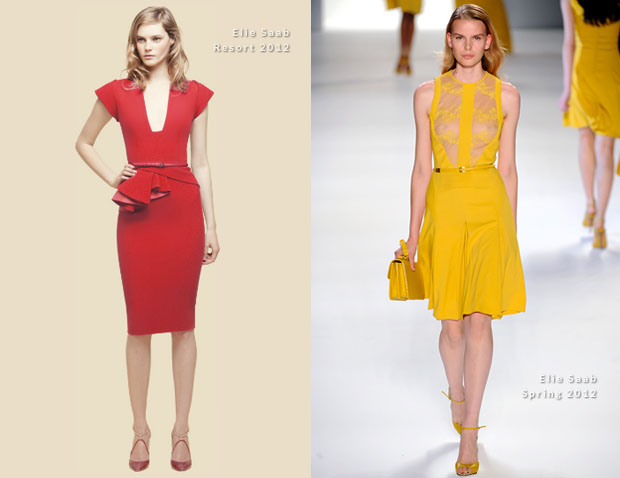