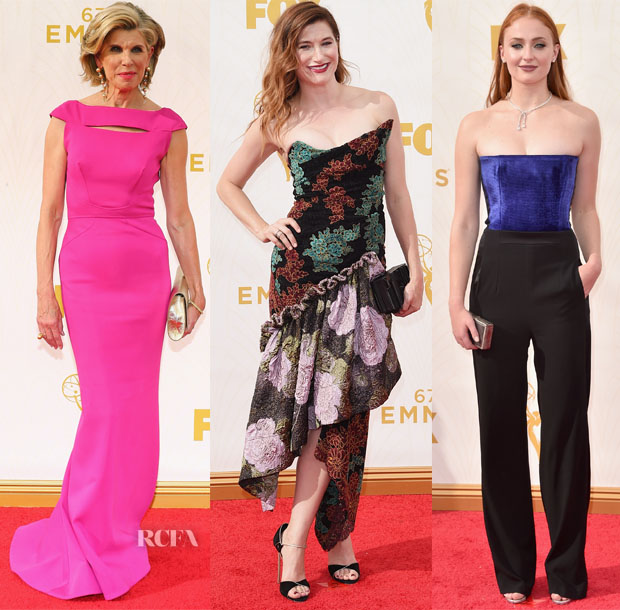 Many more stars turned out for the 2015 Emmy Awards, held on Sunday night (September 20) at the Microsoft Theatre in Los Angeles, California.

Christine Baranski: Joining the bright-colour brigade, ‘The Good Wife’ actress wore a Zac Posen Resort 2016 gown in a delicious shade of hot pink paired with Chopard jewels. The hue was everything here, taking the simple elegance of the gown to bold new levels.

Kathryn Hahn: The ‘Parks and Recreation’ funny girl turned on her more serious side in a Vivienne Westwood patterned dress style with a Rauwolf clutch. Sometimes these mismatched looks were, but here the mix of heavy, upholstery-like florals and asymmetrical ruffling put this look on rather frumpy, awkward territory.

Sophie Turner: One of the pretties in pants, the ‘Game of Thrones’ actress cut a modish and mannish profile in a Galvan Fall 2015 tailored jumpsuit with Forevermark Diamonds. 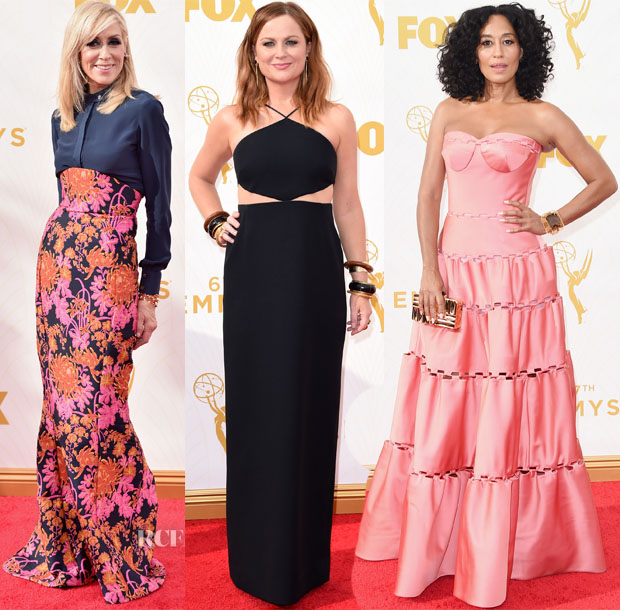 Judith Light: This Zac Posen Resort 2016 gown commanded attention with its fireworks of floral brocade contrasted to the structured simplicity of the navy shirting. I have a feeling this will be a love or loathe moment for many.

Amy Poehler: The auburn-haired ‘Parks and Recreation’ nominee may not have won the Emmy trophy but her Michael Kors Resort 2016 cutout gown was elegantly stage-worthy. The addition of piles of bangles decorated the chic minimalism of the dress.

Tracee Ellis Ross: While this could have been a pretty-in-pink moment, her Zac Posen Spring 2016 cake-topper of a gown came across as a bit precious and overworked. 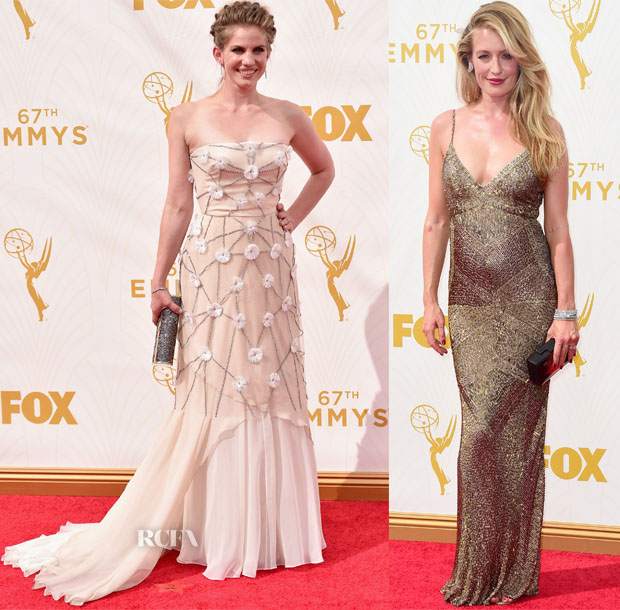 Anna Chlumsky: Perhaps I would have liked this Bibhu Mohapatra Resort 2016 floral-embellished gown had the actress opted for a less ageing hairstyle. But I have my doubts. A Jimmy Choo ‘Cosma’ clutch completed the rather homespun look.

Cat Deeley: Always serving up glamour, the television host—and her burgeoning baby bump—stunned in a Monique Lhuillier Fall 2015 column gown that had all the va-va-voom elegance without a hint of try-hard. She styled the metallic moment with a small Rauwolf clutch and sultry, voluminous waves. 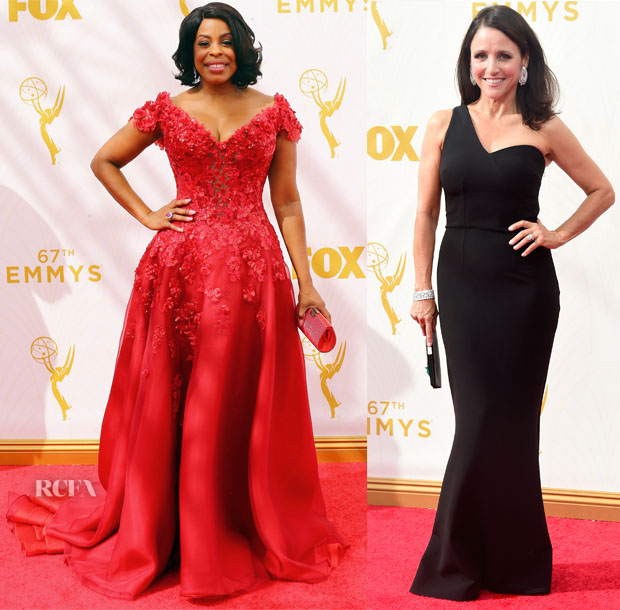 Niecy Nash: This Mark Zunino lace-embellished gown was nothing short of a jaw-dropper with Niecy beautifully managing its voluminous enchantment.

Julia Louis-Dreyfus: While Julia may have snagged the Emmy win from Amy Poheler, the two actresses were equally winning on the fashion front in sleek, statement-making black gowns. This SAFiYAA asymmetrical design was suitably dazzling with the accompaniment of Chopard jewels. 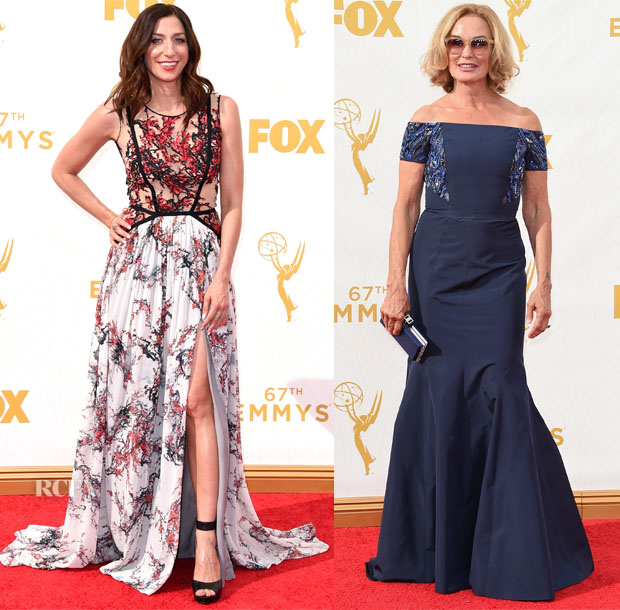 Chelsea Peretti: The stand-up comedian didn’t exactly have me standing up and applauding her Gabriela Cadena gown manifested in a rather messy, ominous array of black and red flora. The mix of the sheer elements of the bodice with the white printed skirt simply didn’t translate.

Jessica Lange: The icon of stage and screen was refined in a J Mendel navy gown with subtle beaded embellishment at the sleeve for added impact. I generally don’t like sunglasses on the red carpet, but these were so chic that they get a pass. 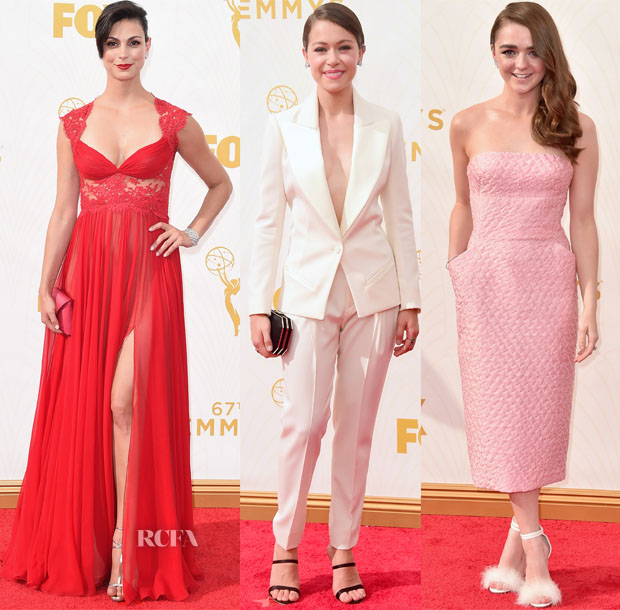 Tatiana Maslany: In a sea of gowns, this Bouchra Jarrar Spring 2015 Couture cream tuxedo stood out for its sleek, androgynous appeal. Better tailoring and more lively Sophia Webster shoes would have taken the look to the next level. 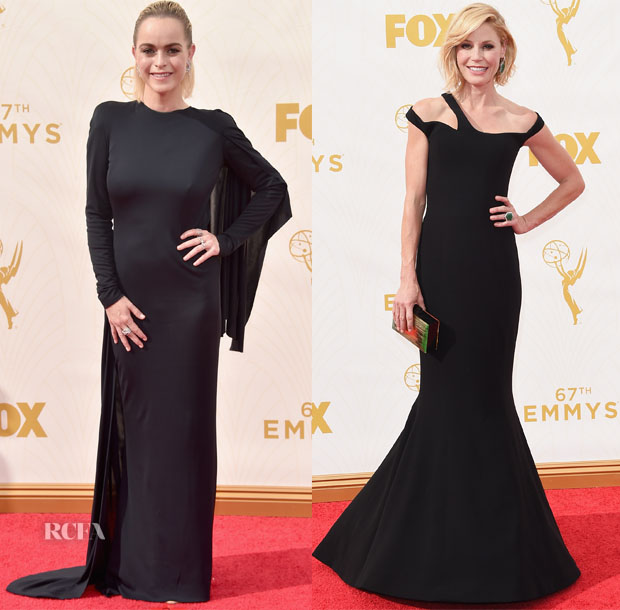 Julie Bowen: Also flaunting the black-is-back trend of the night, the ‘Modern Family’ actress was stunning in a custom Georges Chakra Couture gown that delivered a modern sense of sophistication with the laser-cut asymmetrical neckline and exaggerated hourglass silhouette. The look was perfectly accessorized with jade-green Monica Vinader jewels and a Rauwolf clutch. 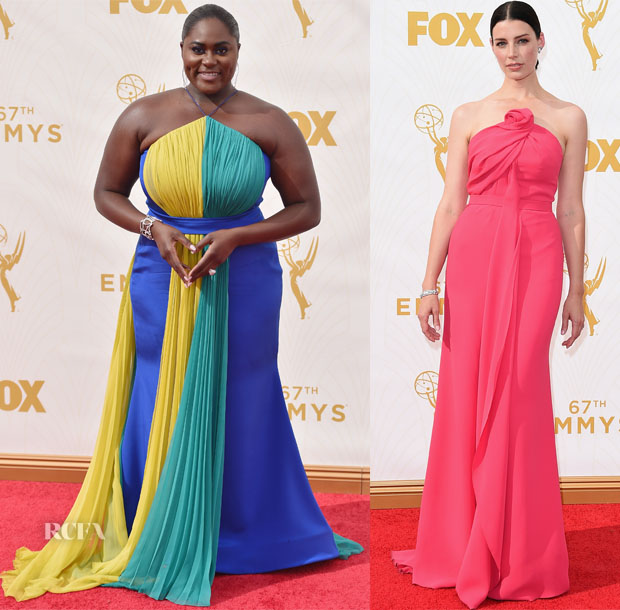 Danielle Brooks: Also joining her ‘Orange is the New Black’ co-stars, Danielle brought her own personal rainbow to the proceedings in a custom Christian Siriano gown in a brilliant shade of sapphire blue plus yellow and teal plisse overlays at the front and back for added movement. While the vibrancy was splendid, it may have been one too many colours at work here as I was slightly reminded of the circus.

Jessica Pare: She channeled a rosy outlook in her saturated pink gown with softly draped lines. The colour was striking with her jet-black hair and alabaster complexion. 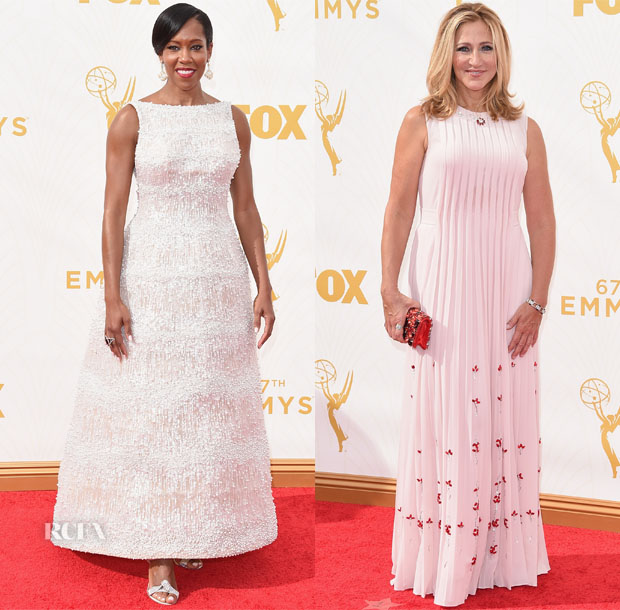 Regina King: The ‘American Crime’ actress and Emmy winner accepted her award in a pearl- and sequin-encrusted Krikor Jabotian frock that sparkled with a youthful sense of quaint whimsy in its bell-like silhouette.

Edie Falco: While I think we’ve all seen worse when it comes to a Prada red-carpet look, this particular white pleated gown was not as flattering as I’d prefer for Edie, and it left me with a craving for a belt. 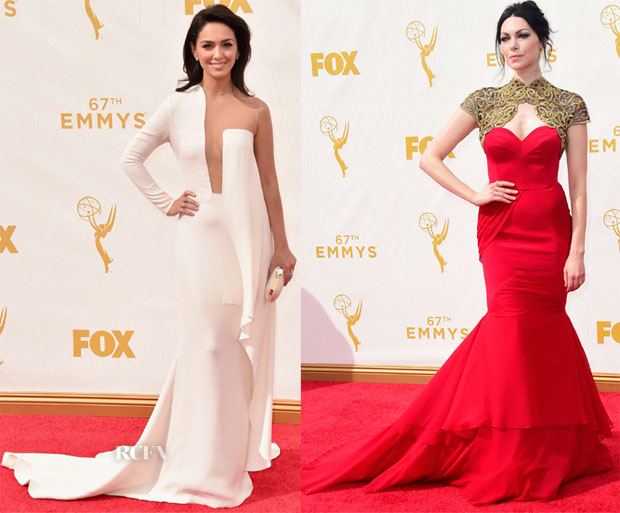 Laura Prepon: Also flaunting her dramatic side, the ‘Orange is the New Black’ star donned an extravagant Christian Siriano custom creation. The decorative capelet-inspired detail set this ball gown from the other extravagant red dresses glimpsed on Sunday evening.