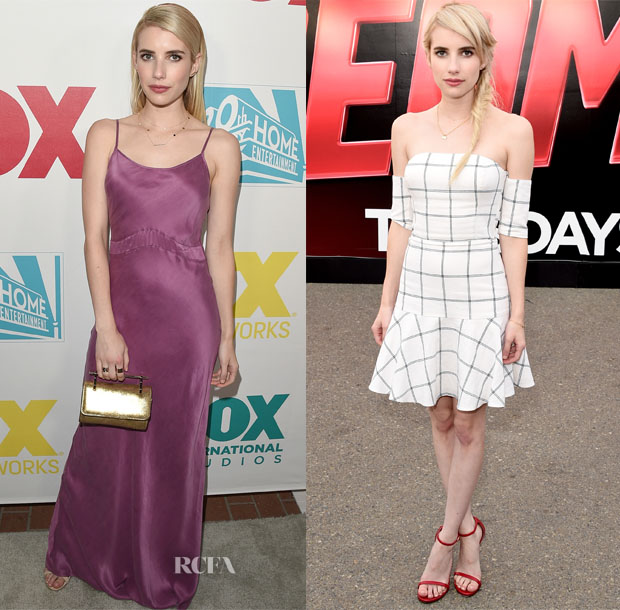 Emma Roberts has also been among the starlets making the rounds at Comic-Con 2015 in San Diego, California over the weekend, where she has been promoting ‘Scream Queens’ alongside Lea Michele and Keke Palmer.

20th Century Fox Party: Her first stop at the Andaz Hotel on Friday (July 10) saw Emma wearing a Awaveawake silk slip dress in a lavender hue that was lovely against her creamy complexion. While it did nod to a boudoir-inspired dressing gown, the look was appropriately kept out of the bedroom with elevated styling that included a metallic gold M2Malletier mini ‘Fabricca’ clutch, Kurt Geiger London ‘Maia’ sandals, and sleek platinum tresses.

‘Scream Queens’ visit the Scream Queens Mega Drop Ride: The next day, she headed to Petco Park in a more playful frock, donning a flirty, fit-and-flair Line and Dot ‘Bisous’ off-the-shoulder dress. I love how she added the pop of a red pair of sandals and a sassy, modern fishtail side braid. 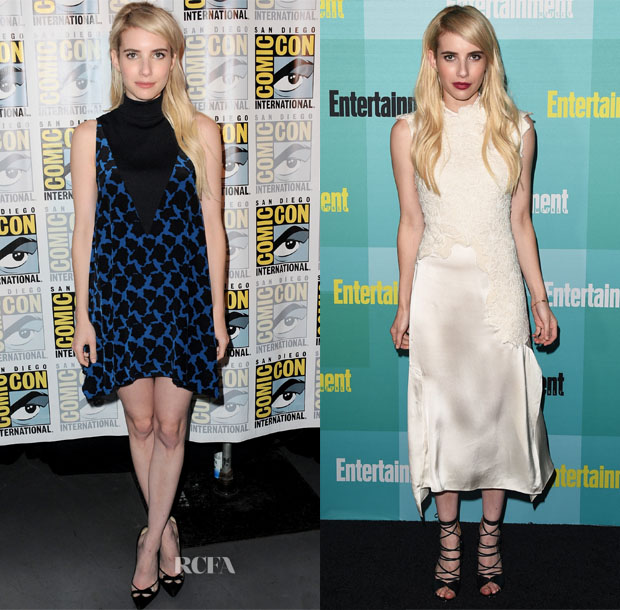 ‘Scream Queens’ Panel: Opting for a darker colour palette, Emma donned a Tanya Taylor Fall 2015 patterned dress with Bionda Castana shoes. Her hair would have been better served in a sleek ponytail here.

Entertainment Weekly’s Comic-Con 2015 Party: Finishing the weekend at FLOAT at The Hard Rock Hotel on Saturday (July 11), she wore another silk dress. With the tonal embroidery that decorated this 3.1 Phillip Lim Fall 2015 design, it could have gone two ways: sweet or sultry. She opted for the latter route, adding moody appeal in an oxblood lip and strappy, black Malone Souliers shoes that took this look into vamp territory—and likewise had me wishing she had selected a different pair.