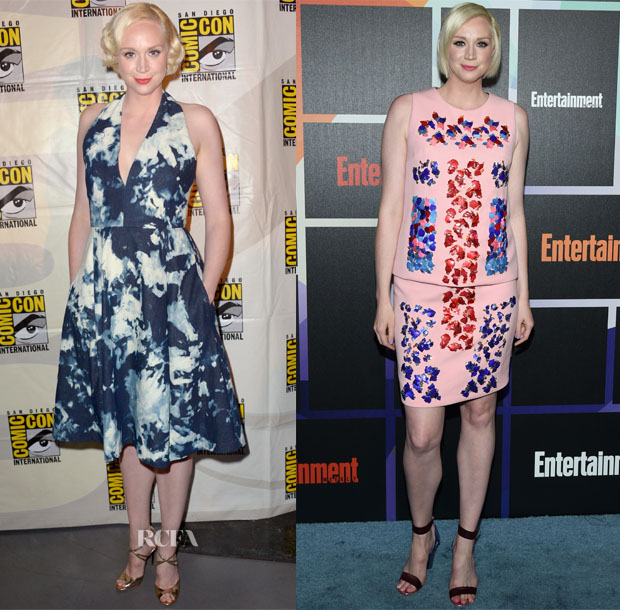 Gwendoline Christie was also in attendance at Comic-Con 2014 in San Diego, California, where she made two completely different style statements over the weekend.

‘Game of Thrones’ Panel: At Friday’s event at the San Diego Convention Center, the British actress again wore one of her favourite designers, Giles Deacon, flaunting a Giles Resort 2015 A-line frock—sans the lookbook peplum. The indigo tie-dyed print followed suit with the whimsical punchiness of the collection, but Gwendoline made the dress all her own via glam, old-Hollywood styling. With her platinum-blonde retro waves, coral-red lip and metallic gold sandals, she was nothing short of a mod Marilyn Monroe.

Entertainment Weekly’s Annual Comic-Con Celebration: For Saturday’s party at the Hard Rock Hotel, she switched out of her Marilyn-esque mood, instead cladding her statuesque frame in a Peter Pilotto Fall 2014 gem-embellished top and skirt, which was made appropriate for summer with the removal of the sleeves. She and Vera Farmiga were evidently drinking from the same Pilotto Kool-Aid, yet this pink hue wouldn’t be my first choice for Gwendoline.

Rosario Dawson In Narciso Rodriguez – Comic-Con 2014: ‘SinCity: A Dame To Kill For’ Experience