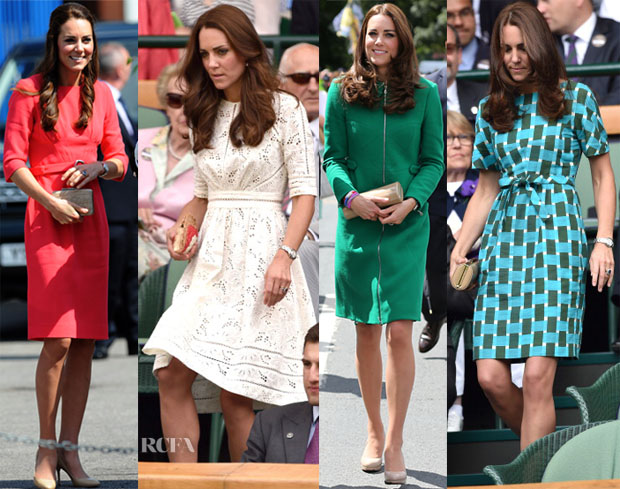 It has been a busy few days for Catherine, Duchess of Cambridge, who has attended several events in the UK this week.

Wimbledon Championships: On Wednesday (July 2) for the Simone Halep v Sabine Lisicki match on Day 9 of the Wimbledon Championships, Catherine repeated her Zimmermann ‘Roamer’ eyelet dress she wore on her tour of Australia. The look was of course styled with her L.K. Bennett nude pumps, with a red, tan and ivory Anya Hindmarch fan clutch providing the finishing touch.

Tour de France Grand Depart: For the official launch of the Tour de France – which, despite its title, kicked off from Harewood House in Leeds, England on Saturday (July 5) – the duchess repeated her green Erdem Pre-Fall 2013 coat. Worn over a green and white printed Suzannah summer dress, her nude L.K. Bennett clutch and pumps were of course also present.

Wimbledon Men’s Final: The duchess attended the Novak Djokovic and Roger Federer match held at Wimbledon on Sunday (July 6). Wearing another repeat, she opted for a Jonathan Saunders Pre-Fall 2012 dress which she first wore back in 2012. While we can’t see her shoes, I wouldn’t bet on her wearing anything other than her go-to L.K. Bennett nude pumps.

24 Responses to A Week In Catherine, Duchess of Cambridge’s Closet