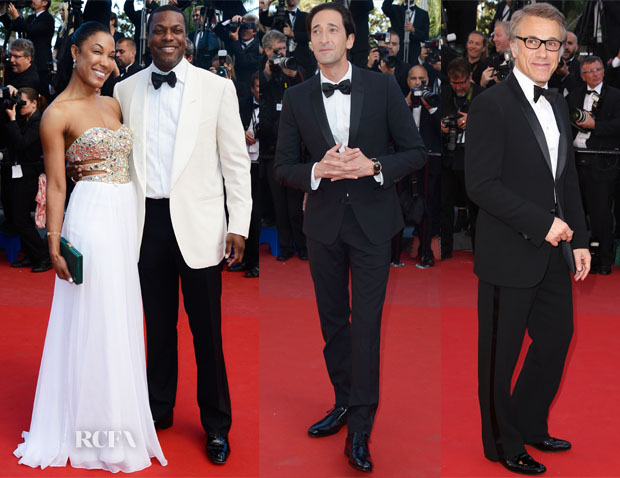 Tuesday premieres during Cannes Film Festival included ‘Cleopatra’ and ‘Behind the Candelabra’, making way for appearances from some actors we haven’t seen in a while and others who have solid red carpet résumés.

Chris Tucker: For the premiere of ‘Cleopatra’ on Tuesday, Chris wore an unbuttoned white dinner jacket similar to the one he wore to the Independent Spirit Awards in February. It’s no secret he’s partial to overly wide lapels, so it was no surprise to see large shawl lapels. He paired the jacket with black pants that could have been slimmed down a bit, a white shirt, and a black bow tie. I love how he selected a jacket to complement his lovely plus one, Azja Pryor.

Adrien Brody: Along with his beautiful date Lara Lieto, Adrien arrived to the ‘Cleopatra’ premiere in a suave black notch-lapel Dolce & Gabbana tuxedo. It fit well, like most suits Adrien wears, and he even added a black-faced Bulgari watch to accent the tux. He finished the look off with a white shirt and black bow tie.

Christoph Waltz: Christoph donned a well-cut black Prada tuxedo for the ‘Behind the Candelabra’ premiere. It fit in all the right places. The shawl lapels and bow tie gave it a little more class. The ease with which Christoph is able to pull off his tux made this my favourite look, just ahead of Adrien. 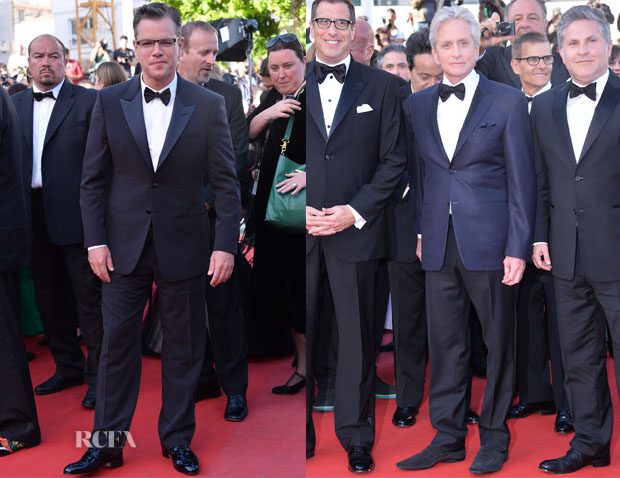 Matt Damon: In a black three-piece peak-lapel tuxedo, Matt almost made a very fashionable return to the red carpet for the premiere of ‘Behind the Candelabra’. His look had great potential but poor execution. The jacket and the waistcoat needed to be nipped in at the waist to be a bit more snug, while the pants were a little baggy and long. If it’s tailored right, a slim-fit suit is just as comfortable as a baggy one, and it looks a whole lot better. The glasses and hair looked good, though.

Michael Douglas: The ‘Behind the Candelabra’ star sported a navy peak-lapel jacket over black trousers for the film’s Cannes premiere. The front button had a lot of pull to it, making it pretty clear the jacket was much too tight. His pants, on the other hand, were several inches too long. A white shirt and black bow tie topped it all off.

‘The Cannes Diaries’ with shoescribe.com