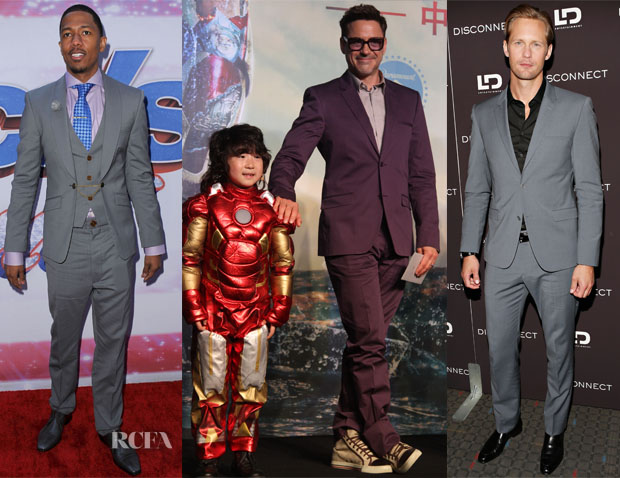 Nick Cannon: The host of ‘America’s Got Talent’ joined Heidi Klum on the red carpet at the Rockefeller Center for the New York auditions. Going for a dapper look wearing a two-piece Vivienne Westwood Man suit, I find myself being bothered by the fit of the pants. The blazer features an insert waistcoat, giving the look a smart but trendy feel with a gold chain and button closure He styled his suit with a grey floral brooch, a lavender shirt, a blue printed tie with a tie pin, and grey shoes.

Robert Downing Jr.: The actor is still in Asia promoting the third installment of the ‘Iron Man’ franchise. On this occasion, he attended a photocall in Beijing, China wearing a Calvin Klein Collection Spring 2013 burgundy cotton two-button notch lapel suit. Aside from the obligatory sneakers by Lanvin, this was a surprisingly quirk-free look. I love the colour; the complementary CK shirt and purple tinted glasses help make this one of his best looks so far on this tour.

Alexander Skarsgard: The handsome actor joined Paula Patton on the red carpet last night for the ‘Disconnect’ New York screening. I have one word for Alexander in this Calvin Klein grey suit and black shirt: swoon. 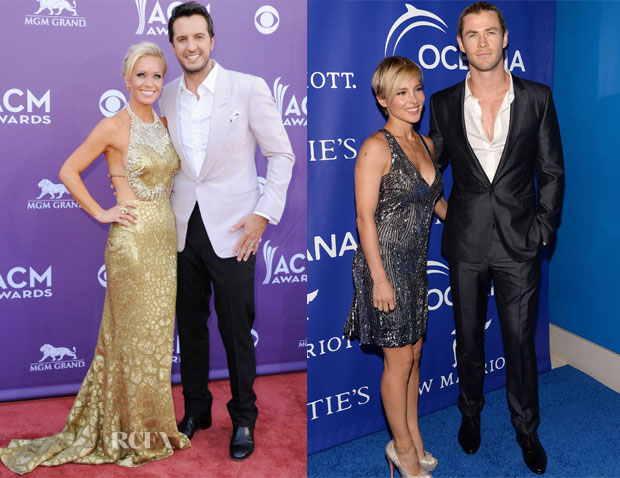 Luke Bryan: The country singer looked very dapper wearing a Tom Ford Spring 2013 suit to the 2013 ACM Awards. I love the soft lilac colour of his one-button rounded-lapel blazer, which he styled with a white shirt and black pants – exactly the way the look was styled in the look book sans scarf.

Chris Hemsworth: Looking very manly on the red carpet with wife Elsa Pataky, the Australian actor donned a Calvin Klein charcoal-grey suit with a white shirt unbuttoned just enough for us to get a look at this pecs. God bless him. 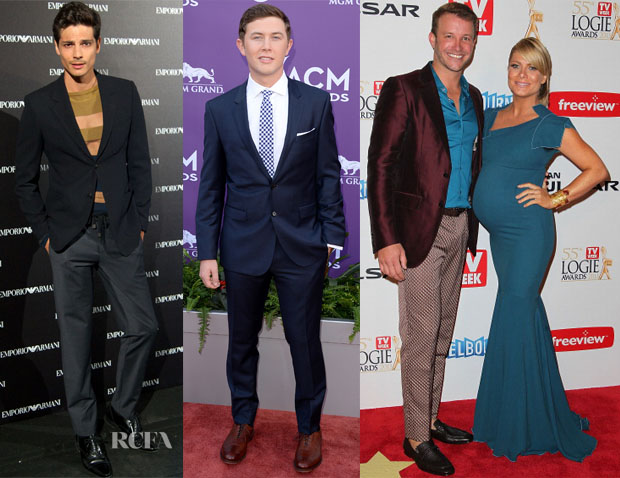 Javier de Miguel: The model joined Maria Jose Suarez on the red carpet for the opening of a new Emporio Armani boutique in Madrid, Spain. He chose to wear Emporio Armani, selecting a look from the Spring 2013 collection. A casual striped, sheer top was styled with drawstring pants and a simple black blazer. As this was a formal event I can understand why he opted for the blazer, but this look would’ve worked for me sans blazer with some comfy loafers.

Scotty McCreery: The Country singer, who won the 10th season of American Idol, joined his idols on the red carpet at the 2013 ACM Awards. Opting for a slick and formal look, he donned an Alexander McQueen slim-fit suit styled with a crisp white shirt, white pocket square and blue-and-white gingham tie.

Luke Jacobz: At the Logie Awards, the Australian actor opted for a snazzy suit, alongside his pregnant Australian X Factor colleague Natalie Bassingthwaighte in Roland Mouret. I love everything about his Ermenegildo Zegna Spring 2013 suit, which features a maroon blazer, cerulean-blue shirt and printed pants. Moments like this make me fall in love with menswear and assure me that there’s more to it than black, grey and navy suits. 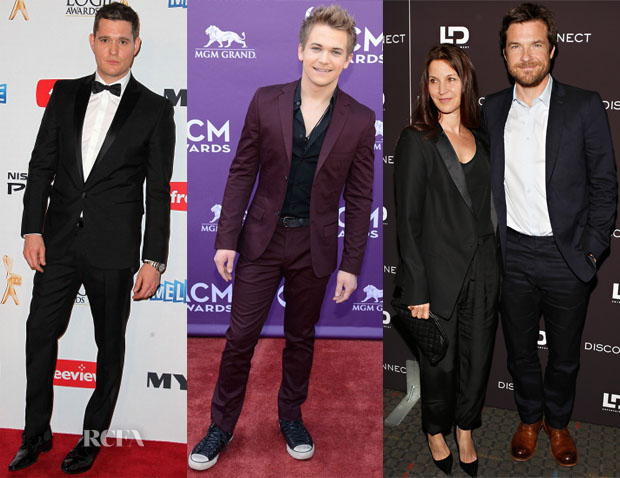 Michael Buble: The Canadian crooner also attended the Logie Awards in Australia this weekend, but he sported a more classic look, wearing a Burberry Tailoring black suit with satin lapels, which he styled with a white shirt and cheeky bow tie.

Hunter Hayes: The singer wore a burgundy Topman suit with an open black shirt. While I love the youthful approach of adding converse kicks to his suit, I wish they weren’t so dirty.

Taking Alexander Skarsgard and Chris Hemsworth out of the equation, who is your next favourite here?

57 Responses to Menswear Red Carpet Round Up