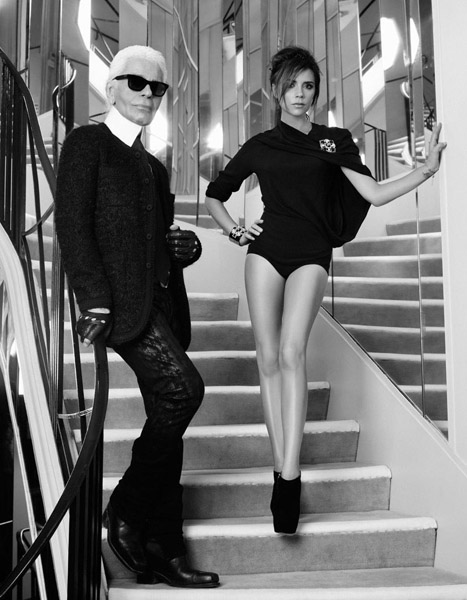 Back in July Victoria Beckham was spotted out shopping in Paris at Colette, Balenciaga, Miu Miu, Alaia and Church, but her main reason for being in the city of lights was for a photo shoot with Karl Lagerfeld.

Earlier today an excited VB published a few photos from her shoot, which was for Elle France, via her Twitter account.

The black-and-white shoot sees Victoria wearing just black or black and white whilst standing on the famous mirrored staircase at 31 Rue Cambon.

I have to say I am relieved.

When Victoria tweeted photos of the wardrobe for this photo shoot, I wasn’t too enamoured by the tweed on display.

VB doesn’t strike me as a Chanel girl, so I’m glad the end results (so far) feature no tweed or boucle pieces.

The designer does wear Chanel jewels, black shoes and her signature pout in the editorial.

Posted by Catherine Kallon on October 17, 2012 In: Victoria Beckham