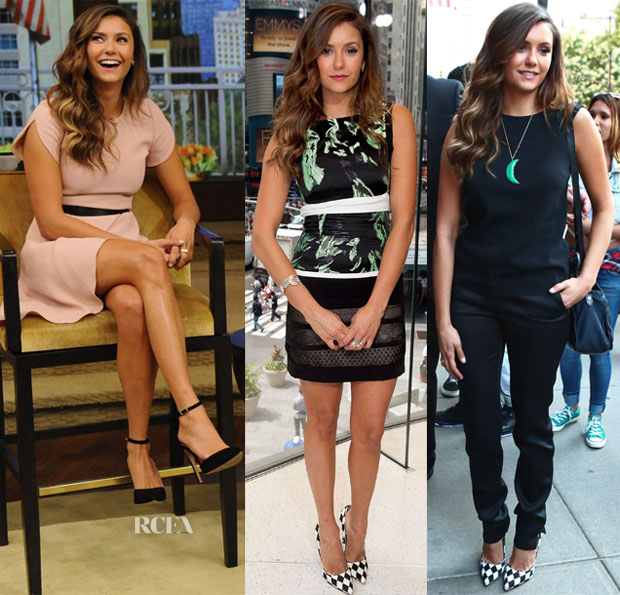 Following her guest appearance on Sirius XM on Monday morning, Nina Dobrev had three more looks while she promoted her new movie, ‘Let’s Be Cops’, in New York City.

‘Live with Kelly and Michael’: She kept it simple and pretty on the morning show, donning a pale-pink Andrew Gn dress with a contrast black waistband which she completed with black Oscar Tiye ankle-strap pumps.

‘Extra’: Before her next stop at the ‘Extra’ studios in Times Square, she did a quick change into a J. Mendel Pre-Fall 2014 mint and black floral organza sleeveless dress featuring an alluring lace skirt. Most would’ve thought the print on the dress sufficed and opted for black pumps, but Nina added yet more flair with her Bionda Castana black and white harlequin-print ‘Daphne’ pumps.

Photocall: Nina opted for the same Bionda Castana statement heels while attending a photocall with the NYPD, dressed in black Elie Saab and adding an Andrea Fohrman green necklace to her look.

The ‘Extra’ look stands out here for obvious reasons; however, I am equally drawn to the soft Andrew Gn look worn on ‘Live with Kelly and Michael’ as it was a refreshing change of pace from her edgier looks worn throughout the day. 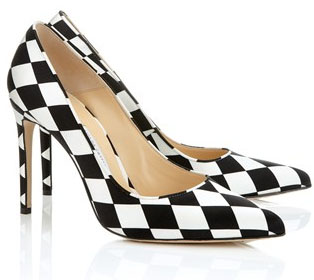 You can buy Nina’s Bionda Castana ‘Daphne’ Pumps from Avenue32.com.