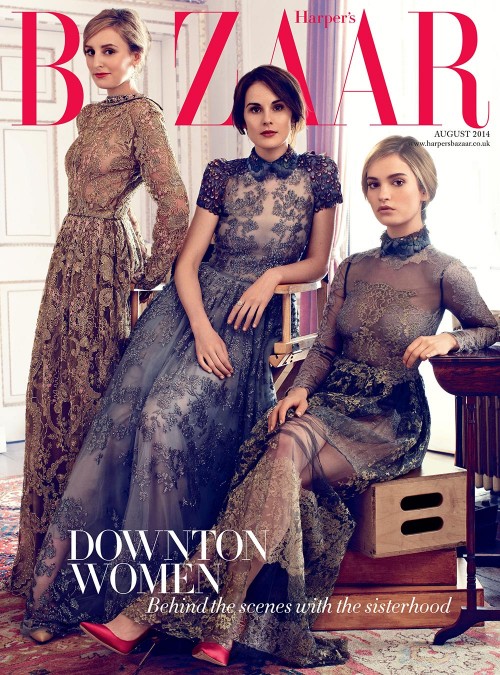 There are two covers for the August 2014 edition of Harper’s Bazaar UK: one featuring Laura Carmichael, Michelle Dockery and Lily James, and one of just Michelle on her own.

All the ladies are wearing looks from Valentino’s Pre-Fall 2014 collection, with Michelle’s the most familiar as we’ve already seen this beauty on Cate Blanchett.

With ‘Downton Abbey’ returning for Season 6 in the fall on ITV, Harper’s Bazaar caught up with the ladies.

Michelle Dockery on how she’s ‘grown with the role’: ‘Lady Mary always seemed sure of herself, but “it was a brashness that came from insecurity, whereas now it’s different, she’s very confident in her own skin, and I guess [that’s] the parallel, really, with my own life; I feel like I’ve reached a point now where I’m much more content and confident”.’

Laura Carmichael on when a French journalist who asked her why the show is such a hit; what’s the secret to its triumph: ‘Instead of answering, I turned the tables and asked him what he thought. “Because it is full of women”, he said, and I was like, “God, you’re so right!”‘

Lily James on the daily education on acting and being an actor on set: ‘I’m learning a lot about how to be one of the “good” actors. You’d hope that it’s natural to be a good person, and kind, but I’m learning how to deal with long, sometimes boring days.’

To see the full photo shoot, which includes the rest of the female cast, in the August issue of Harper’s Bazaar, pick up a copy when the mag hits newsstands tomorrow, 4 July.

Who Was Your Best Dressed At The Serpentine Gallery Summer Party?