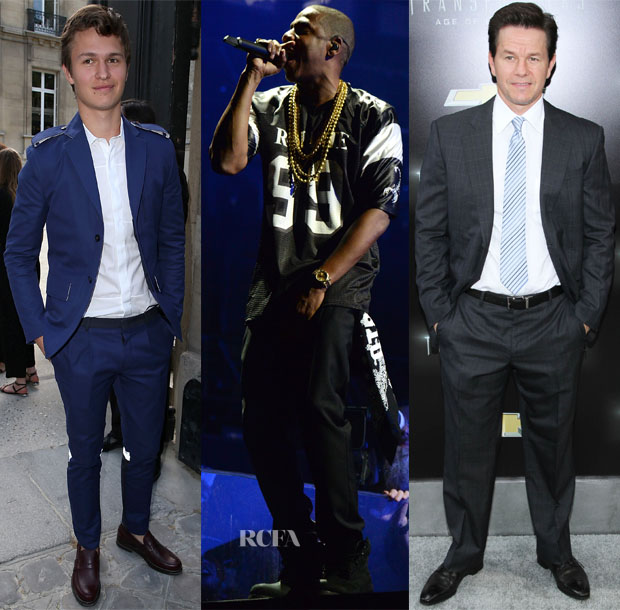 Here is a quick look at what some of the guys were wearing on the red carpet yesterday.

Ansel Elgort: The young actor attended the Valentino show as part of Paris Fashion Week Menswear Spring 2015 in France. Wearing a Spring 2014 navy suit with epaulettes to give it a military feel, the look was styled with a white shirt and brown Valentino loafers. He is giving a very strong Jude Law vibe here.

Jay Z: The rapper, who joined his Atelier-Versace-clad wife on their joint ‘On The Run’ tour yesterday evening, wore a custom Rodarte black, charcoal and white ’99 Problems’ jersey with black cargo pants and a lot of bling.

Mark Wahlberg: The ‘Transformers’ actor joined his co-stars Nicola Peltz and Li Bingbing on the red carpet for the New York premiere last night wearing another Giorgio Armani suit, which fared much better, fit-wise, than his last outing. 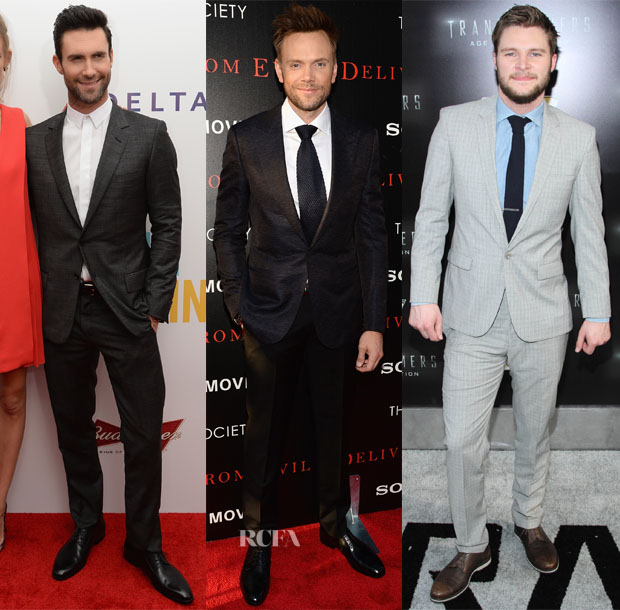 Adam Levine: Joining Keira Knightley on the red carpet for the ‘Begin Again’ New York premiere, the singer wore a Dior Homme grey wool microcheck two-button notch-lapel suit styled with a white cotton shirt and black leather derbies. While Justin Theroux also opted for a tieless, buttoned up look, he did add a pin. On this occasion it feels like something is missing, rather than making a fashion statement.

Joel McHale: The funny man joined Olivia Munn on Tuesday evening for the premiere of ‘Deliver Us From Evil’ wearing an Ermenegildo Zegna navy one-button peak-lapel suit with an oversized tie which almost ruins the look for me.

Jack Reynor: The young actor scrubbed up rather nicely wearing a light-grey Calvin Klein suit, shunning the expected white shirt for cool-blue and completing the look with a black tie accented with a silver pin.