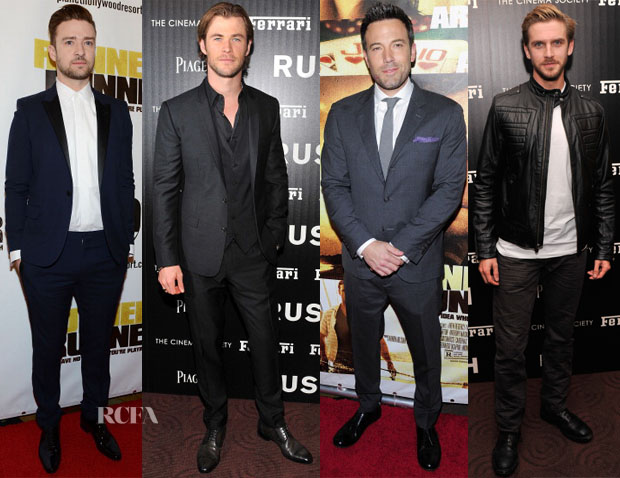 This week, the guys kept on giving us their sartorial best at several recent movie premieres, with looks ranging from informal to a bit more fancy.

Justin Timberlake: Rocking a side of scruff, the ‘Suit & Tie’ singer-actor attended the ‘Runner Runner’ premiere at Planet Hollywood Resort & Casino in Las Vegas, Nevada on Wednesday evening. He suited up in a formal midnight-blue tux with black lapels that was worn tie-less with a crisp white dress shirt by Saint Laurent.

Chris Hemsworth: After attending the Rome premiere of ‘Rush The Movie,’ Chris hit up the film’s New York City screening at Chelsea Clearview Cinema on Wednesday. Donning a Dolce & Gabbana monochromatic black suit and tie-less button-down, Chris maintained a casual-cool vibe that let his stare rather than his style do most of the talking.

Ben Affleck: Ben was also on the red carpet with Justin at the ‘Runner Runner’ premiere, where the actor was traditionally handsome in a dark suit, popped with a light grey tie and a purple pocket square.

2013 ESPY Awards Menswear Round Up

2013 BAFTA Awards Menswear Round Up