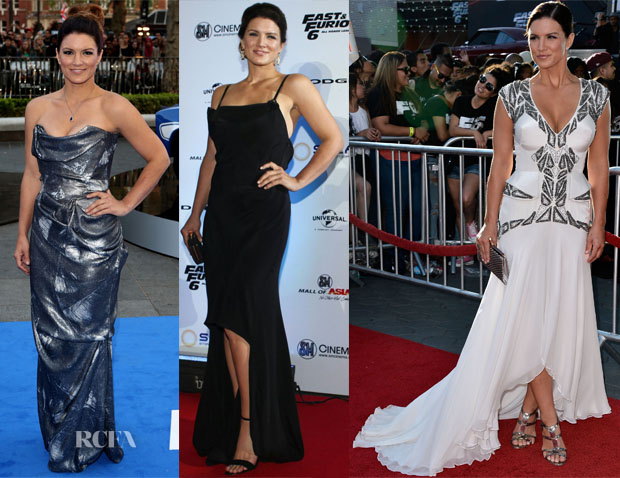 The ‘Fast & Furious 6’ had its final stop on its world tour yesterday evening in Universal City, California. One of the main stars, Gina Carano, had three great looks during the tour.

London Premiere: Earlier this month, Gina was in London, saluting our fine city wearing a look from the Vivienne Westwood Couture collection which was custom made for the actress. The signature gunmetal-blue sequin gown was styled with an ombre top knot and palladium jewels.

LA Premiere: Going out with a bang, Gina’s gorgeous curves were showcased wearing a white Amanda Wakeley plunging gown with gunmetal beaded embellishments and a high-low hem with a layered train. With the risen hemline we were able to take a gander at her gunmetal Rupert Sanderson sandals, which perfectly complemented the beaded details on her gown, as did her Christian Louboutin silver fishnet clutch and Dana Rebecca Designs and palladium jewels.

The Burberry is a simple yet elegant gown. The Westwood is nothing we haven’t seen before, even though I love the look, so my favourite here is the Amanda Wakeley. It’s the most unique of the three, it’s soft and feminine with an edge, plus it has reignited my love for embellishments.