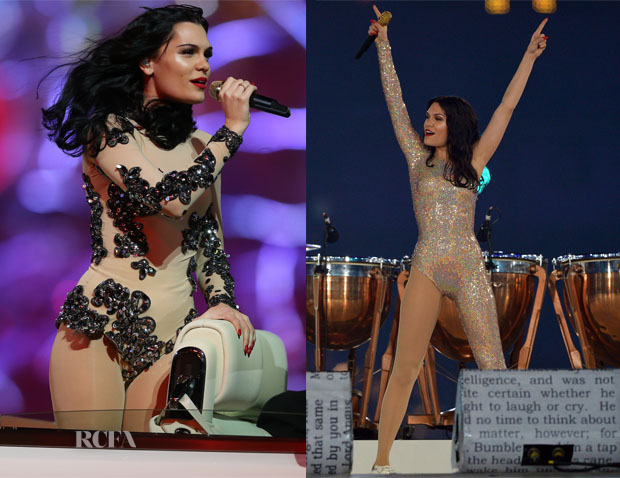 Jessie J was one of the many performers to take to the stage at the Closing Ceremony of the 2012 London Olympics on Sunday evening.

She started off by performing her hit single ‘Price Tag’ while sitting in an open-top Bentley which did laps around the Olympic Stadium.

She later joined Tinie Tempah to perform his anthemic song ‘Written In The Stars’ with the set ending with Jessie, Tinie and Taio Cruz all taking to the stage to perform the Bee Gees hit ‘You Should Be Dancing’.

Jessie may have had a makeover, but her love for a one-piece remains strong.

Jessie returned later in the show to join Queen to perform their classic song ‘We Will Rock You’, opting for yet another jumpsuit by Vivienne Westwood.

On this occasion the asymmetrical nude look with embroidered gold sequins only had one sleeve and one leg.

Many of you aren’t too crazy about Jessie’s makeover, but you will be delighted that she hasn’t lost her touch when it comes to performance outfits.