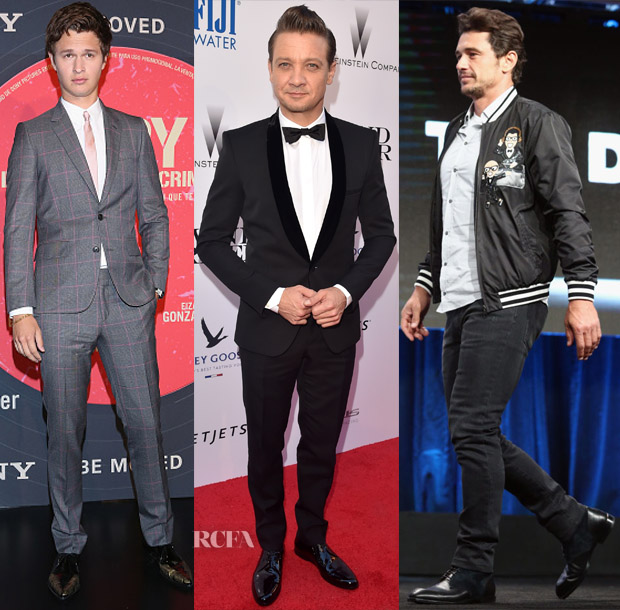 Our menswear roundup of the day takes us to three different places and press occasions for this trio of handsome stars.

Ansel Elgort: Another day, another ‘Baby Driver’ stop for Ansel who was with Eiza Gonzalez in Mexico City for the premiere on Wednesday (July 26). I love the eclectic variety of looks he’s served up recently, with this pink-accented windowpane suit adding to the list. Feather-painted, lace-up shoes were an unexpected finish that proved he’s not afraid to colour outside the lines of the expected norm—or wear baby pink.

Jeremy Renner: Joining Elizabeth Olsen for the ‘Wind River’ LA premiere on Wednesday (July 26), Jeremy made an impressive, formal showing in a sharp Saint Laurent by Anthony Vaccarello tuxedo. Sometimes you just cannot deny the power of a classic.

James Franco: As executive producer of ‘The Deuce,’ James came out for the 2017 Summer TCA press tour in Beverly Hills on Wednesday (July 26). Without taking his look too seriously, he wore a cool, off-duty Dolce & Gabbana ensemble that cheekily celebrated the designers with their cartoonish patches on the bomber jacket. The relaxed look was styled with Christian Louboutin ‘Wolfgang’ brogue boots.