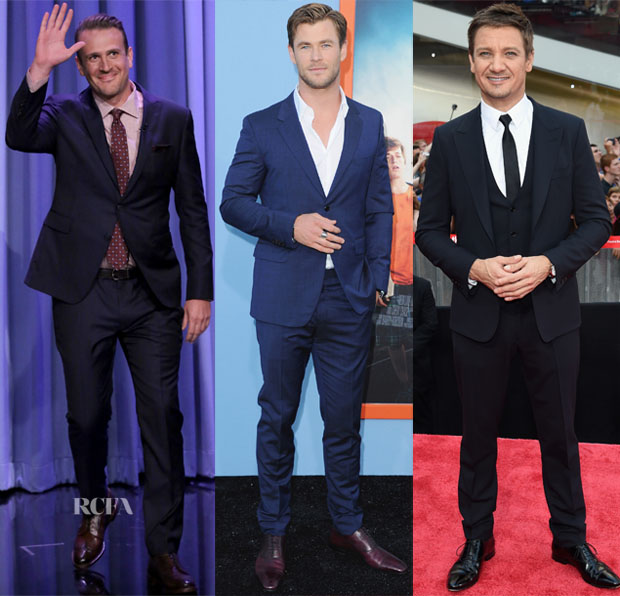 Here’s a quick roundup of some of the fine gentlemen who hit the red carpet this week.

Jason Segal: I was in awe of how dapper Jason looked in his Etro navy suit while making a guest appearance on ‘The Tonight Show Starring Jimmy Fallon on Wednesday (July 29).

Chris Hemsworth: The Australian actor joined his lovely wife Elsa Pataky on the red carpet on Monday (July 27) for the LA premiere of ‘Vacation’. Also going the navy suit and plum shoe route, the actor wore Prada, taking the formality out of the look by going sans tie. Such a shame about the ill-fitting trousers.

Jeremy Renner: The actor attended the New York premiere of ‘Mission Impossible: Rogue Nation’ on Monday (July 27) with Tom Cruise and Rebecca Ferguson. While this black Dolce & Gabbana three-piece suit is quite a common look for Jeremy, I can’t help but marvel at the fine Italian craftsmanship. 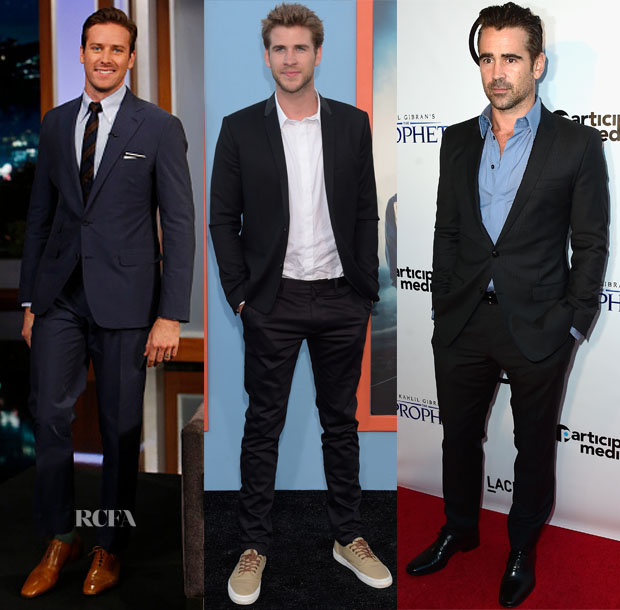 Armie Hammer: Continuing his promotional efforts for ‘The Man from U.N.C.L.E.’ the actor made a guest appearance on Jimmy Kimmel Live on Tuesday (July 28). He also wore a navy suit – courtesy of Thom Sweeney – paired with tan Christian Louboutin Greggo dress shoes.

Liam Hemsworth: Joining his brother on the red carpet for the ‘Vacation’ premiere, the actor went the smart-casual route styling this look with sneakers which didn’t work on this occasion. Like his brother, this trousers were also ill-fitting.

Colin Farrell: The handsome Irish actor was of course wearing Dolce & Gabbana for the screening of GKIDS’ ‘Kahlil Gibran’s The Prophet’ on Wednesday (July 29). When it comes to expert tailoring, his look is on par with Jason, Jeremy and Armie.