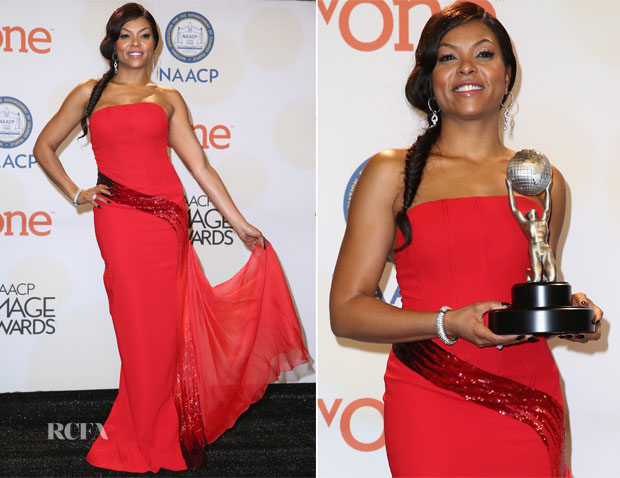 Taraji P. Henson was also among the star-studded list at the 2015 NAACP Image Awards, held at the Pasadena Civic Auditorium in Pasadena, California on Friday (February 6).

Recognized as NAACP’s Entertainer of the Year and also winning the Outstanding Actress nod for ‘No Good Deed,’ she couldn’t have looked more ravishing to her accept her trophy.

The fiery-red Edition by Georges Chakra gown featured a strapless, corset bodice and the swoop of figure-flattering, tonal sequin embellishment that cascaded into a sheer chiffon side train.

A fishtail side braid was a cool-girl alternative to a more traditional ’do. It perfectly balanced the sultry sophistication of the dress, which was completed by Tacori silver jewels.

Catherine Zeta-Jones In Editions by Geor...

Teyonah Parris In Amato by Furne One – 2015 NAACP Image Awards