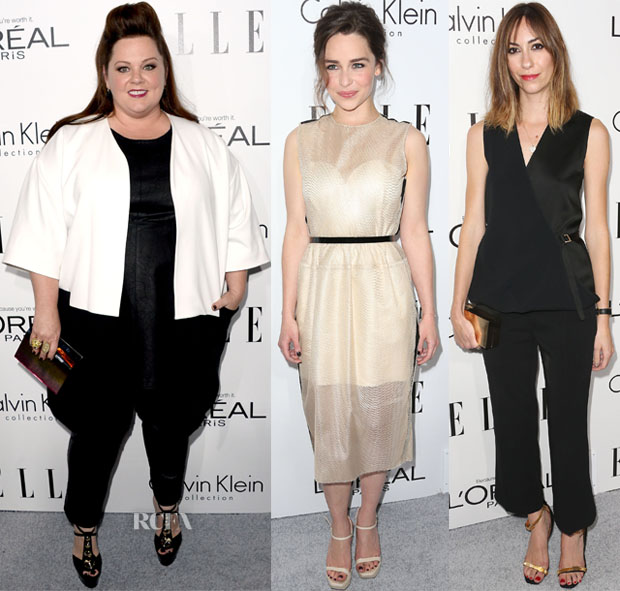 Melissa McCarthy: One of ELLE’s November cover girls, Melissa took a trendsetting approach in a Calvin Klein ensemble, featuring a black leather-look top and pants and a white bolero jacket, to which she paired a Rauwolf ombre-effect clutch, studded sandals and a few gold cocktail rings. A pompadour-inspired ‘do topped off her edgier entrance.

Emilia Clarke: The ‘Game of Thrones’ starlet was polished in a sheer effect, nude Calvin Klein Spring 2013 frock, cinched in with a black belt. Nude sandals with an embellished metallic heel added an intriguing, style-forward note, while her wispy updo and soft rose-toned makeup were just plain pretty.

Gia Coppola: Also in Calvin Klein, the director-screenwriter skipped a dress in favour of separates including a wrap-front top and cropped black pants, adding some shine via gold sandals and a bit of colour via a berry lip lacquer. 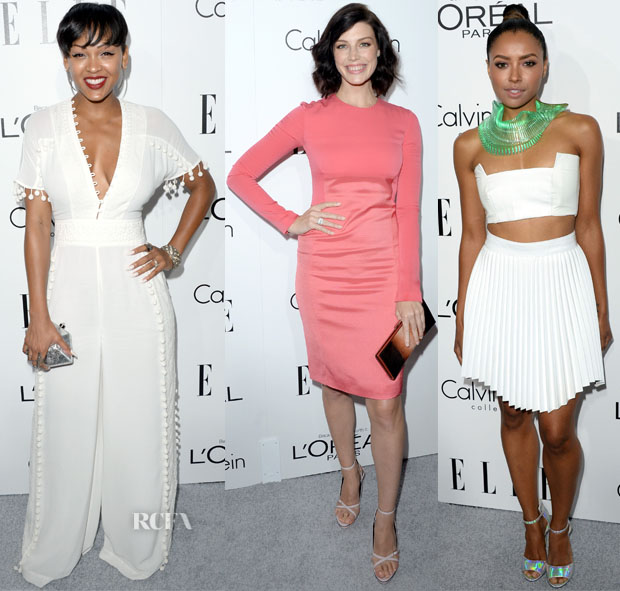 Meagan Good: The actress was one of many in white at the event, debuting a plunging Marchesa jumpsuit, edged in playful pompom embellishment. Brian Atwood shoes, a silver Matthew Campbell Laurenza clutch, and a smattering of Ocnarf Sairutsa, ELAHN and Amrapali jewels, not to mention a bold crimson lip, accessorized her look.

Jessica Pare: The ‘Mad Men’ actress matched her pink lippie to her bubblegum-hued Calvin Klein figure-hugging frock, which proved a striking contrast to her raven-haired locks. Blush-coloured sandals and a darker, ombre clutch finished the ensemble.

Katerina Graham: ‘The Vampire Diaries’ star made quite the statement in another of the evening’s white ensembles. Her OLIMA cropped top and pleated skirt would have been head-turning enough, but she upped the ante even more with a high top-knot, holographic Topshop sandals and one of the most interesting necklaces I have seen in some time. The neon-green Sarah Angold Spring 2013 laser-cut acrylic creation reminded me of an artsy slinky. 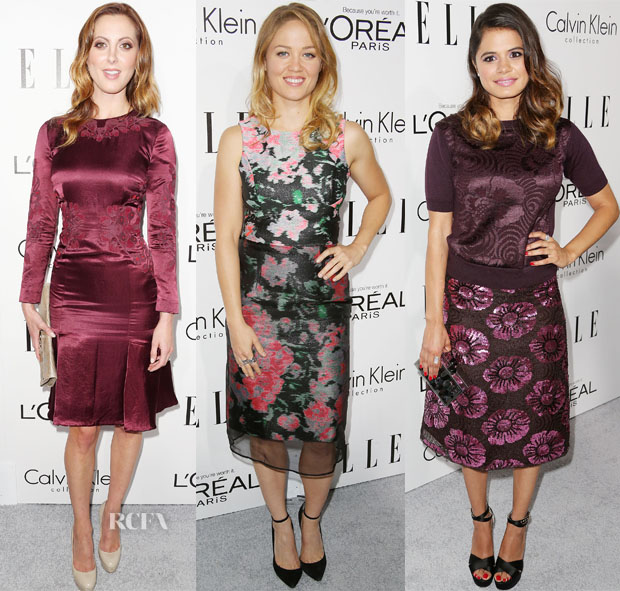 Eva Amurri Martino: I couldn’t get behind the nude clutch and pumps that paired with Eva’s deep fuchsia, embroidered Tory Burch dress.

Erika Christensen: The ‘Parenthood’ actress wore an Erdem frock in one of the label’s signature floral prints, featuring a black shirt overlay skirt. Black ankle-strap pumps finished the look with a sophisticated touch, although I still felt like something was missing here.

Melonie Diaz: Everything was coming up flowers for Melonie, too, in her all-purple ensemble featuring an embossed jumper and A-line skirt. Chunky, black sandals wouldn’t have been my choice pair. An Emm Kuo clutch completed her look.