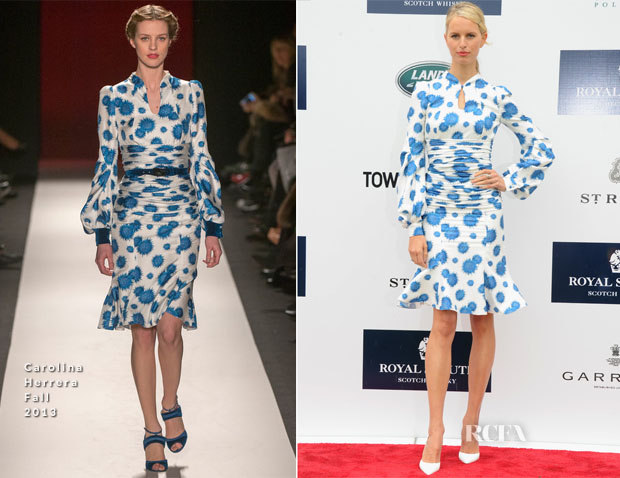 Model Karolina Kurkova turned out for a day of sport at the 2013 Sentebale Royal Salute Polo Cup at the Greenwich Polo Club in Connecticut, hosted on Wednesday during HRH Prince Harry’s visit to the United States.

After a punkish spin at the Met Gala last week, the statuesque stunner referenced another style era, the ’40s, with this retro-chic moment; a bell-sleeve dress from Carolina Herrera’s Fall 2013 collection.

Covered up in abstract blue dahlia blooms, Karolina strutted out an entirely different vibe from her customary cool-girl edge in this prim and proper frock.

But she was no wallflower and can obviously keep pace with old Hollywood glamour, too.

In fact, I almost prefer her more simplistic styling of the look to that seen on the runway, as she turned the neckline into a keyhole and threw off the dark-navy belt in favour of letting the ruched corset waist stand on its own.

The matching sandals were also cast aside for a straightforward pair of white pumps, while she topped off the ensemble with a casual side-parted ponytail and a petal-pink lippie.

Perfect for polo, or too plain?

JW Anderson for Versus by Versace Collection Launch Party

Posted by Rachel Watkins on May 16, 2013 In: Carolina Herrera, Karolina Kurkova, Runway To Red Carpet