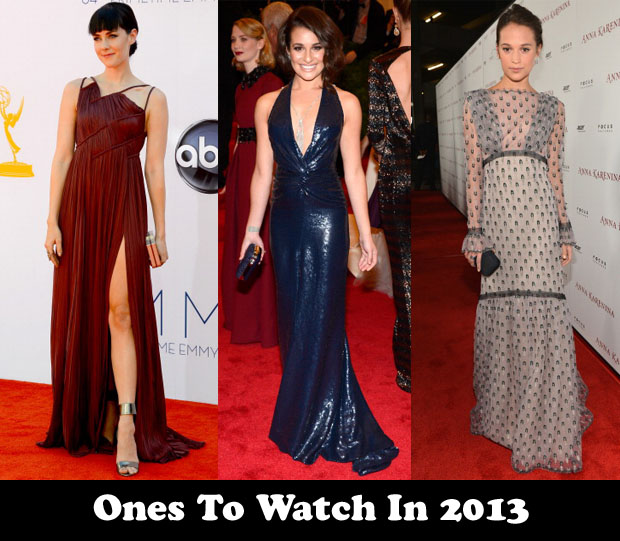 2013 will not be unlucky for these three lovely ladies.

Jena Malone: The indie film favourite may have a long list of diverse experiences under her belt, including ‘Donnie Darko’, ‘Pride & Prejudice’, ‘The Ruins, Saved!’, and ‘Sucker Punch’, but it’s her coveted, high-profile role of fiery Johanna Mason in the 2013 film, ‘The Hunger Games: Catching Fire’, which is about to send the 28-year-old into the big time. The actress loves to wear up and coming labels such as Cushine et Ochs and Juan Carlos Obando. With a major movie to promote, will she stick to these labels, or will she be opting for the bigger name designers?

Lea Michele: Like Jena, Lea is hardly a new kid on the block, but she is the newest ambassador for L’Oreal. I am chomping at the bit for her first appearance on the red carpet for the 2013 Cannes Film Festival because no matter how OTT she will most definitely be, we are in for an Atelier Versace, Emilio Pucci treat.

Alicia Vikander: The beautiful Swedish actress did the impossible in 2012, standing out on a red carpet alongside her more famous co-star Keira Knightley. This is no mean feat, so I have put Alicia on my one-to-watch list. In just two red carpet appearances, she has gone from Rodarte to Chanel Couture. Some actresses have worked a lifetime and never even got close to donning a Chanel Couture creation.