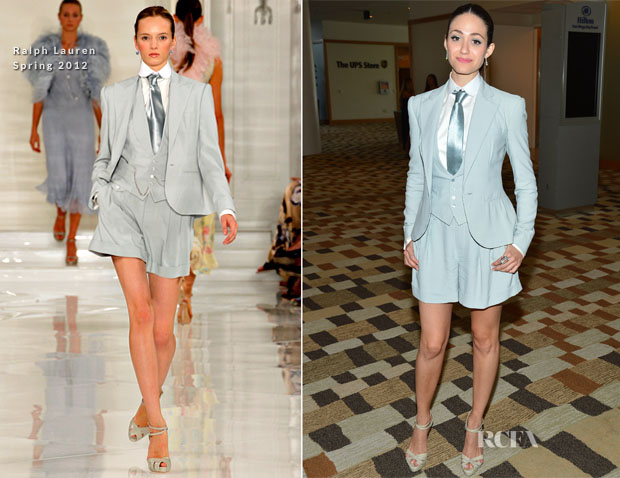 Emmy Rossum participated in a discussion at the ‘Shameless’ panel during Comic-Con 2012 on Saturday, which was held in San Diego, California.

The actress gave a new meaning to the power suit with her baby blue shorts ensemble — complete with a matching tie — from Ralph Lauren’s Spring 2012 collection.

While I think the suit looks adorable on Rossum and complements her sweet, comedy-driven character, her hair, which is pulled back rather severely, makes the look a little too board room ready for an event like Comic-Con.

Her shoes work well with the suit — they don’t take away from the statement made by the clothing and add height so that her legs aren’t lost in the boxy cut of the shorts.

Had she worn her hair down and vamped up her jewelry choice a little, I think Rossum’s look would have gone from appearing to be straight off the runway to something that she had put her own stamp of personal style on.

Do you think Rossum could have done something to improve this look? Or do you think she got it right the first time around?