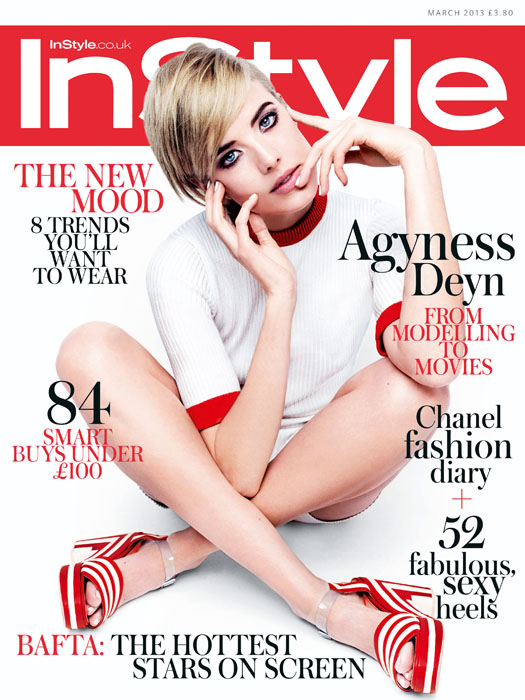 He also captures the blonde, for now, beauty wearing a 3.1 Phillip Lim plaid dress, and a white Moschino dress with a white felt hat for the rest of her editorial.

Agyness talks to InStyle about the hard transition from model to actress, getting married to actor Giovanni Ribisi and moving to LA.

The March 2013 issue of InStyle UK is out now. Here are some extracts from Agyness’ interview.

On modelling: “For a long time, I was such a nomad. That was my life for so long. Doing shit like that. Being in a hotel, not knowing where you are. You could be in any country…”

On the differences between the worlds of acting and fashion: “I just found that acting is very real for me… rather than projecting something that’s unobtainable.”

On whether she moved to LA to work: “No, I came here for a change. Not really work. It’s just really chilled here.”

On what Giovanni has brought to her life: “I don’t know. I suppose you meet someone and you’re just like… you know. Obviously, if someone’s marrying someone, they’re bringing a lot of really good stuff… So…”

Posted by Catherine Kallon on January 31, 2013 In: Agyness Deyn