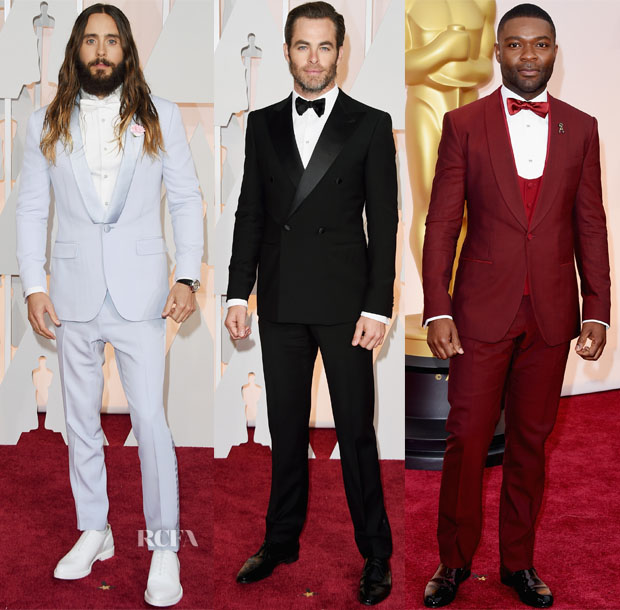 The men were out in force at the 2015 Oscars and the 2015 Vanity Fair Oscar Party, where there was plenty of handsome inspiration to go around from a fine group of fellows.

Jared Leto: Getting the evening started on a non-traditional note, the actor and musician was every bit the unorthodox Academy Awards dresser in his baby-blue Givenchy tux, accented by a white bowtie and white lug sole shoes. He let his hair down literally and made no excuses for it, saying that the Oscars was his going-away party for his locks. I wonder if the beard was also included in that party. While no one could pull this off like Jared, between the mane and the male pastels, this was verging on almost too much too handle.

Chris Pine: A stark contrast to Jared, Chris went for the all-out traditionally classic route and suited up in a Giorgio Armani black double-breasted peak-lapel tuxedo. It was impeccable and goes to show what transformative power a well-tailored tux can have.

David Oyelowo: Looking as if he was inspired by the red carpet itself, the ‘Selma’ actor dressed to impress in a crimson Dolce & Gabbana three-piece tuxedo word with #TackleEbola handcrafted pin by Jason of Beverly Hills. He does a great job pulling off this colour, yet I’m not completely sold on the satiny look of the vest and bowtie underneath. 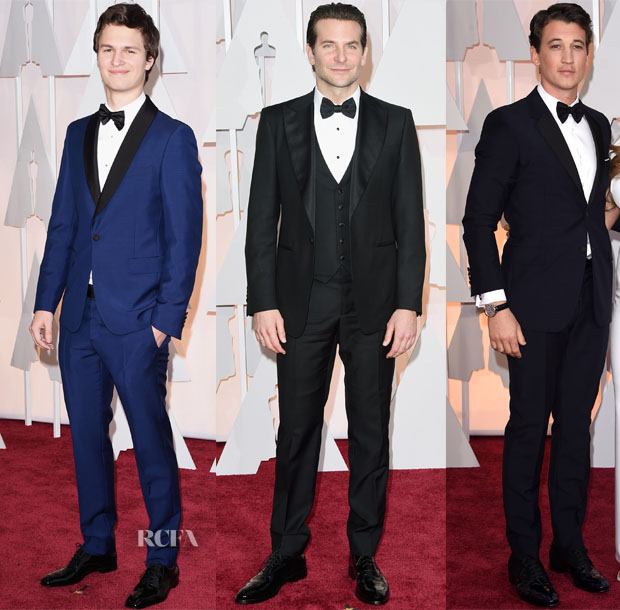 Ansel Elgort: ‘The Fault in our Stars’ cutie, who took his mom as his Oscars date, was nothing if not adorable in a Prada blue mohair, one-button tuxedo with a contrasting black silk shawl collar—even if he did look like he could have also been on his way to a well-dressed prom.

Bradley Cooper: The ‘American Sniper’ actor and nominee was suave in a black Salvatore Ferragamo three-piece suit, styled with a bowtie, Montblanc cufflinks, and an IWC timepiece. Even when he’s not wearing blue, his own baby blues are piercing.

Miles Teller: The ‘Whiplash’ star wore a navy kid-mohair tuxedo with a black faille notch lapel, accessorized with Montblanc cufflinks and watch. I don’t know if his sleeve is pushed up to show off the timepiece, or if this ensemble was tailored a smidge too snugly around the arms. 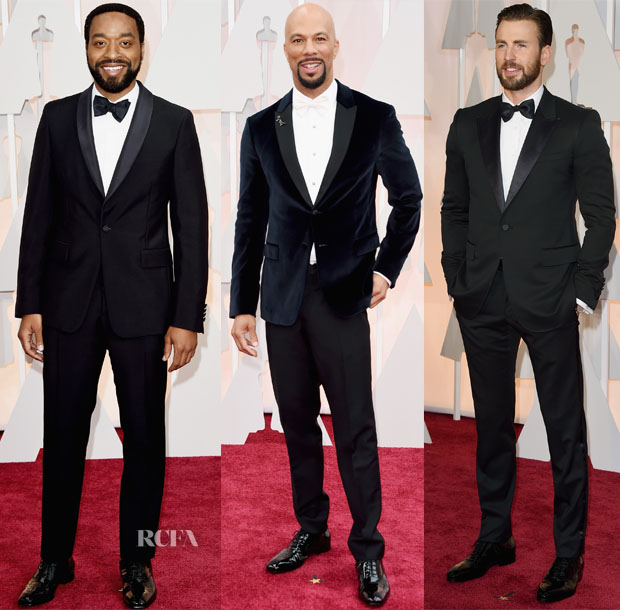 Chiwetel Ejiofor: Also one of the men who wore navy, the actor’s Prada mohair shawl-collar, smoking tuxedo was classic if nothing special. That is wasn’t black added a nice depth to the traditional statement.

Common: One of the nominees of the night, Common wore a Prada navy velvet, peak-lapel dinner jacket with black smoking mohair trousers before taking to the stage to perform ‘Glory’ from the film, ‘Selma.’ The pants could have been better tailored, but I love that he wore white-on-white with his dress shirt and tie for an unexpected flair.

Chris Evans: The actor was polished in a midnight-blue Gucci ‘Marseille’ peak-lapel, one-button tuxedo that had him looking just as handsome as ever. 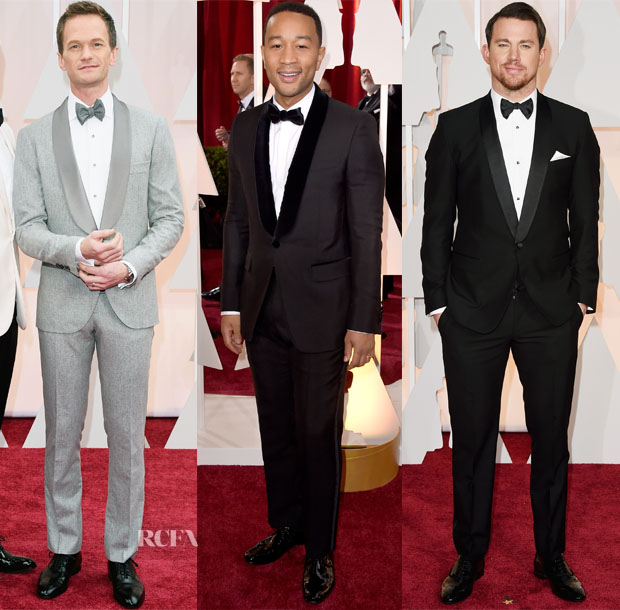 Neil Patrick Harris: Before commencing his Oscars hosting duties, Neil first walked the red carpet in a light heather-grey Brunello Cucinelli suit paired with a white dress shirt and grey bowtie. As the night’s host, I’m glad he opted for something besides the standard black or navy tux—plus, this look is in keeping with his more trendsetting style.

John Legend: Performing alongside Common, the singer first hit the red carpet in a Gucci Made to Order black, one-button ‘Marseille’ tuxedo with velvet shawl lapel. I love the extra richness and subtle luxe factor achieved through the velvet.

Channing Tatum: The actor cut a striking profile in a Dolce & Gabbana tuxedo, although this is the point in which all the suits start looking the same. So I’m glad that he completed the look with the subtle addition of a white pocket square, as even the smallest details can make all the difference. 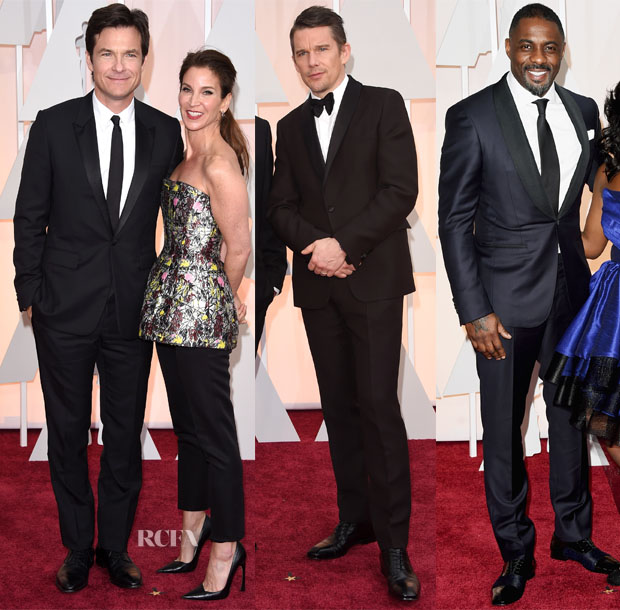 Jason Bateman: The funny-man actor wore a Dior Homme suit and regular tie, with his wife, Amanda Anka, in a Dior metallic peplum top and black cropped pants. I’m not sure either of them were in full-on Oscars form, as he could easily be on his way to a business meeting not the Academy Awards.

Ethan Hawke: The ‘Boyhood’ actor and nominee brought chocolate-brown to the party in his richly hued Prada tricotina shawl-collar tuxedo. While I wasn’t crazy about the cut of the jacket, I do like seeing this variation on the traditional black ensemble.

Idris Elba: Dressed in a midnight-blue Ermenegildo Zegna suit and traditional black tie, the actor made a dapper showing, even if the ensemble’s sheen factor wasn’t exactly camera-flash-friendly. 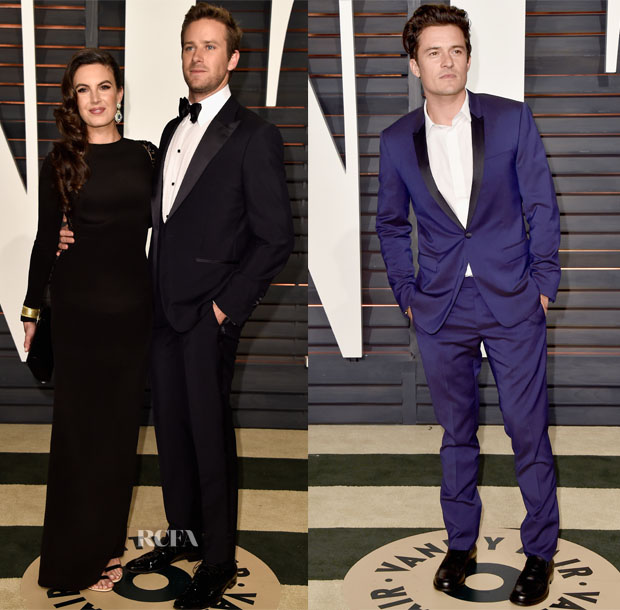 Armie Hammer: Arriving at the Vanity Fair Party with his lovely wife, Elizabeth Chambers, beside him, the actor dressed in a traditional, three-piece tuxedo by Thom Sweeney—and he wore it quite regally.

Orlando Bloom: Making a more casual entrance, the actor got us out of the dark blue and black mood with a lighter navy Dior Homme wool tuxedo with a slim peak contrast lapel. He skipped the tie with his white cotton shirt with blue banded collar, completing the look with a new hair cut. Given the less tailored, messier lines of the look, I’m not fully on board. But the colour and his undeniable cool attitude are working in his favour. 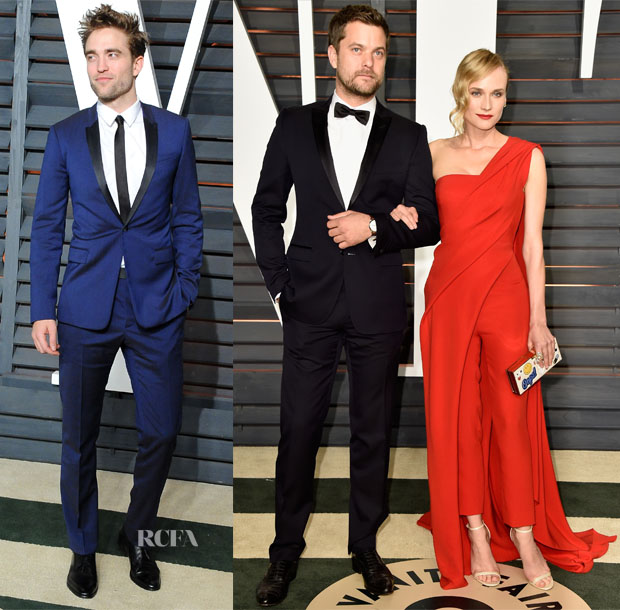 Robert Pattinson: Also wearing a brighter shade of blue like Orlando, the actor selected a Dior Homme wool tuxedo with contrast black satin, slim-peak lapels, paired with a white cotton shirt and black silk skinny tie. This look is formal—with a flair—so it keeps me from yawning. Although, his hair could have perhaps used a touch less styling gel.

Joshua Jackson: Walking the red carpet alongside the lovely Diane Kruger at the Vanity Fair party, the actor was the perfect match to her red Donna Karan hybrid number, himself donning an immaculate black Dolce & Gabbana tux for which I can find no fault—suave and elegant are the words that come to mind.

Who Was Your Best Dressed At The 2015 Oscars?