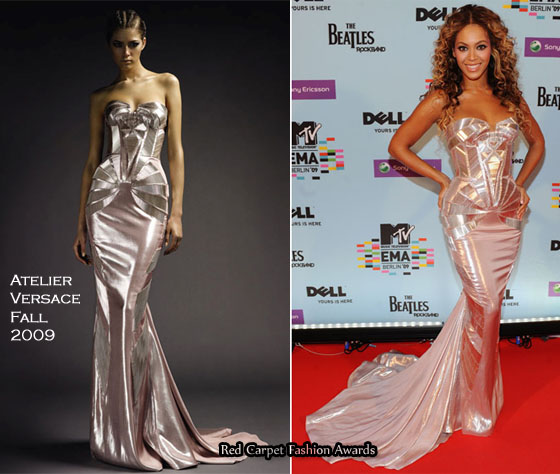 Joint Best Dressed Award
This Atelier Versace Fall 2009 strapless gown was made for a body like Beyonce Knowles’.

The colour is absolutely divine on her, the sheen of the dress really pops, the bodice has an strong warrior feel to it which would’ve been the desired look for the independent woman.

I love how this gown skims her hip, and I’m pleasantly surprised at the lack of bling.

I would’ve preferred her hair pulled back, but now I’m just looking for flaws in an otherwise flawless red carpet look for B. 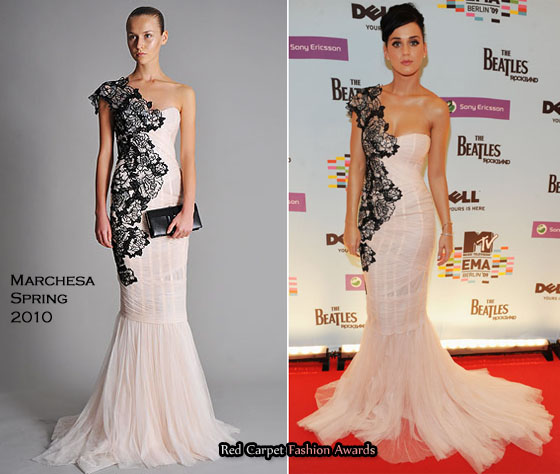 Joint Best Dressed Award
Trying to pick who was Best Dressed out of Beyonce and Katy Perry, was like a mother being asked to pick her favourite child.

How do you choose?

Normally Katy wows us in a different way in eccentric Manish Arora pieces, but this time she wows us by looking so graceful in a nude one shoulder Marchesa Spring 2010 draped tulle strapless gown with embroidered black floral.

If there’s any room, both are up for BDOTW. 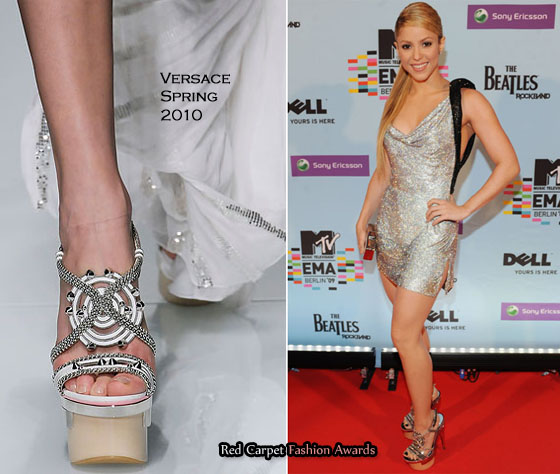 Most Sexy Award
Whilst stars like Katy Perry and Beyonce were wearing stunning – should’ve been saved for the Oscars – gowns, Shakira opted for shimmering silver ultra mini dress which left very little to the imagination.

I wonder if this dress was custom-made by Donatella Versace because the Sharika is wearing Versace Spring 2010 heels with her look. 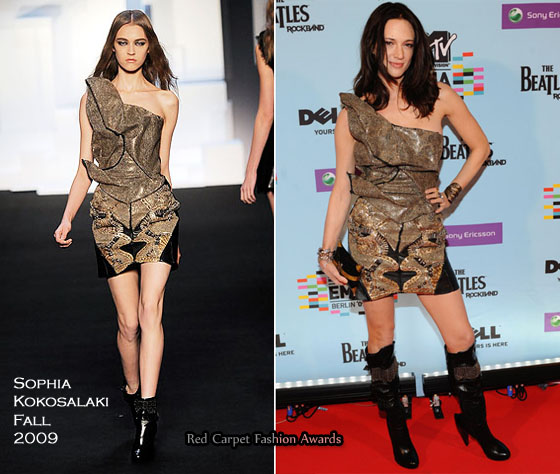 This is because she wore a very similar dress on the Italian version of X Factor last week.

I must preferred the previous look. This doesn’t feel as well put together. 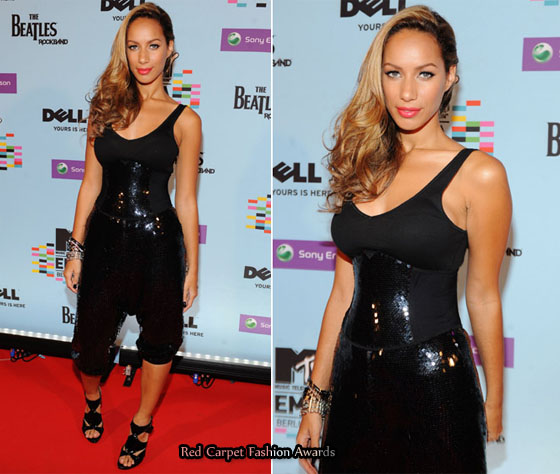 Surprisingly Not Predictable Award
When I learned that Leona Lewis was attending this show I assumed she would wear something quite boring, but I was wrong.

Normally we see calf-length dresses, tights and no personality.

Not only is she giving us plenty of personality, but she’s also looking very sexy in her corseted look which includes black sequin harem pants and black vest Vivienne Westwood ensemble.

I can’t believe I just said harem pants are sexy, but Leona makes them work.

Normally I would complain about the two-tone hair, but it all adds to the fierce attitude of this look.

Her coral lips are divine.  I wish I could get away with that shade. 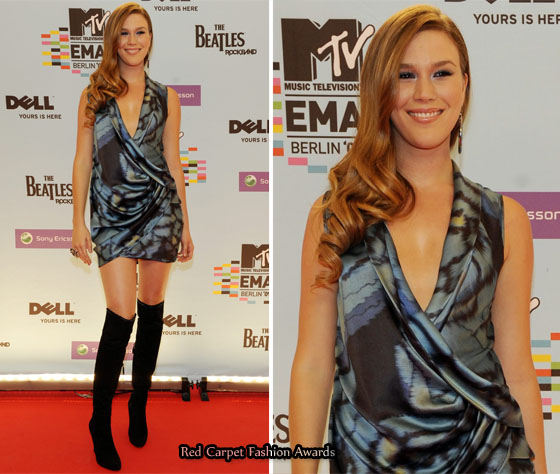 On Trend Award
Normally I find it hard to say anything nice about Joss Stone, but I really like her look.

It’s young, fun, on trend with the Over-The-Knee boots, plus I love how her super glossy hair is swept to one side. 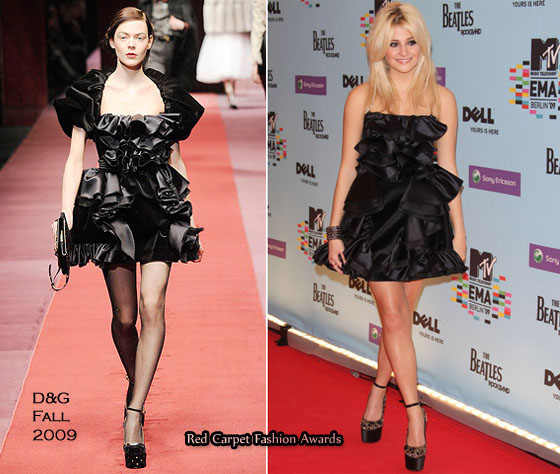 Most Disappointed Award
Normally Pixie Lott is a lot more creative on the red carpet.

She normally brings colour and vibrancy, to this occasion her D&G black ruffled dress is nice but I know she can deliver more. 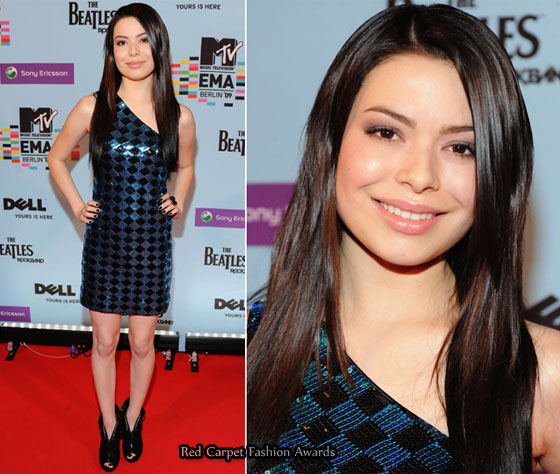 Not More Ankle Boots On The Red Carpet Award
Miranda Cosgrove was the teen star of the night working Alexander McQueen ankle boot with a black and blue harlequin dress. 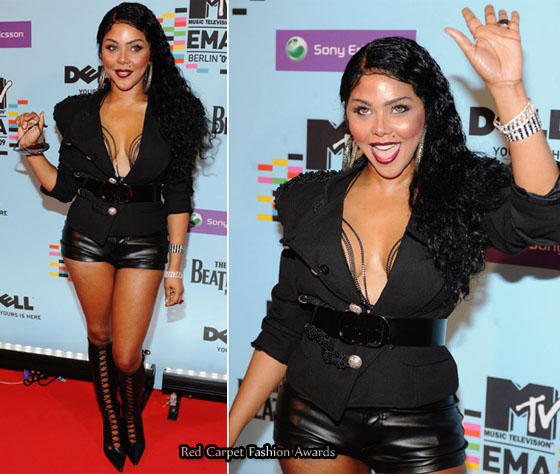 You’ll be surprised to know that this is it.

I can’t believe that such a big ceremony pull in so few stars.