This picture of Victoria Beckham and Naomi Campbell really warmed my heart.

Two of our greatest British exports are in London to celebrate all that is good and great about fashion at Vogue’s private dinner party in London last night.

Victoria was – of course – wearing a dress from her new Spring 2010 collection.

I’m glad to see she opted for one of the cute sassy fun pieces, rather then the pencil dresses, and of course I’m thrilled that it’s a colourful piece.

The designer wore her dress with grey YSL Trib Two’s.

The Stella McCartney Resort 2010 collection will never become boring to me no matter how many pieces we see on celebs.

Natalia Vodianova stood alongside the creator of her ensemble wearing a gold embroidered jacket with a black embroidered dress which Stella McCartney wore to the Prada Congo Benefit earlier this year.

I love what she’s done to her hair here, normally she has it pulled back.

Maybe this is her last chance to let her hair down before her much anticipated Spring 2010 show next month. 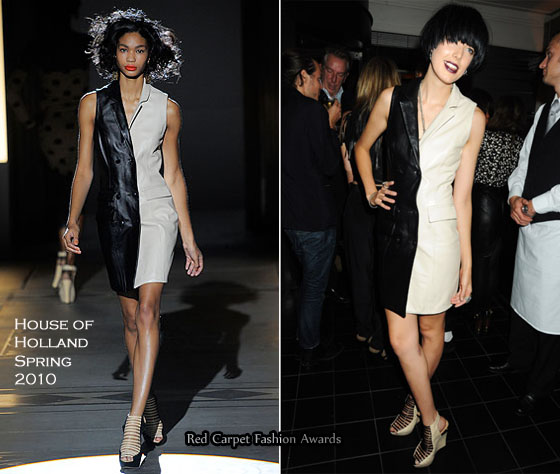 Agyness Deyn was also in attendance wearing a House of Holland Spring 2010 half black, half beige sleeveless leather tuxedo dress.

I know Agyness is one of fashion’s greatest chameleon, but I much prefer her as a blonde.

The supermodel wore her dress with heels from the same show.

The dress with its voluminous skirt was decorated with laser cut floral details.

I love this dress. 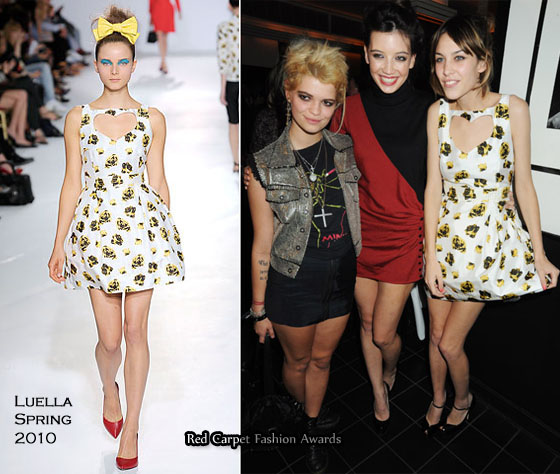 Of course the Brit Pack were there.

Pixie Geldof has finally taken out those god awful extension.

Daisy Lowe wore a black two-tone dress, which is the theme of the night.

But Alexa Chung looked so so cute in her Luella Spring 2010 floral print dress with a heart-shape cut-out on the bodice.

Miley…THIS is the type of cute dress you should be wearing, but in saying that I would prefer it on Selena Gomez.

So proud to write about British fashion, everyone looked fabulous at this event. They could all be up for Best Dressed Of The Week minus Pixie and Daisy.