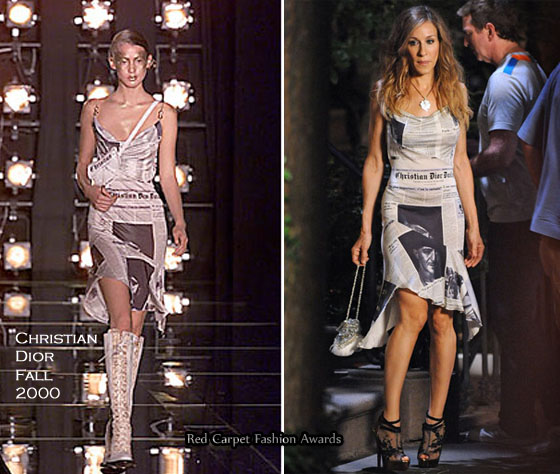 I had major goosebumps when I saw Sarah Jessica Parker as Carrie Bradshaw wearing her Christian Dior Fall 2000 newspaper print dress on set this weekend.

If you are a Sex And The City addict like me, you’ll remember that Carrie first wore this dress in Season 3.

In that particular episode Carrie gets mugged for her Manolo Blahnik heels and Fendi bag…I mean baguette, and thinks her karma is shot.

So she meets Natasha to apologize for wrecking her marriage with Mr Big.

Natasha basically tells her to get lost, but the dress was fantastic as it clung to Carrie’s yoga toned body as she walked down out of the restaurant.

They were either made especially for the movie, modified, or a slightly different version from the ones available to purchase from Bergdorf Goodman. 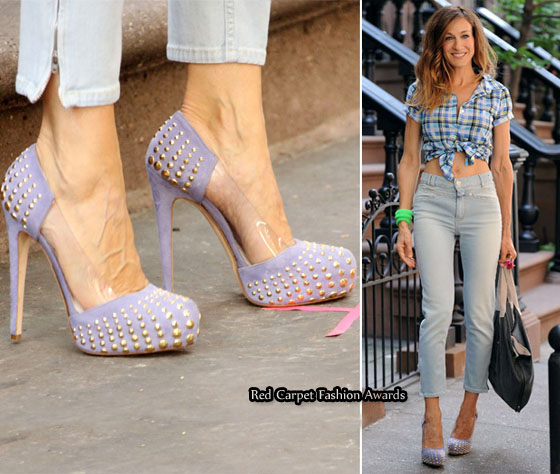 After seeing this picture of SJP on set during the day, all I can think about is going to the gym and doing some sit ups.

I love this casual look, as much as any high-end look SJP wears as Carrie.

Patricia Field always get both so right for Carrie.

I think I’m looking forward to the premieres more than the film.

Posted by Catherine Kallon on September 7, 2009 In: Christian Dior, On Set With…, Sarah Jessica Parker