Prior to flying to Japan to attend the Opening Ceremony opening party, Rinko Kikuchi was in Spain to attend the Barcelona premiere of her movie “Map Of The Sounds Of Tokyo”.

Like Diane Kruger, Rinko has been promoting this movie since Cannes Film Festival where we saw her wear an array of stunning gowns.

On this occasion Rinko went for an edgier look, opting for a Toga Fall 2009 dress which Mary-Kate Olsen wore in black to the same “Opening Ceremony party” Rinko attended this weekend.

Rinko’s dress was blue, which allows us to see more of the pleated and ruffled details.

I love it when Rinko gives us edgy, she never looks uncomfortable and this look suits her kooky style well.

The actress paired her dress with YSL Trib Two heels.

For the Madrid premiere Rinko stuck to the same designer, but this time she wore a black structured peplum dress.

The metallic dress is much simpler than the previous dress, yet still fascinating in it’s design.

The dress has structured cap sleeves, with partial sleeves under the arms.

The peplum on the hips is decorated with a black ruffle trim and the skirt has two diagonal pleats on the front.

Her futuristic dress needed a stand out pair of heels, and she doesn’t disappoint in that department either. 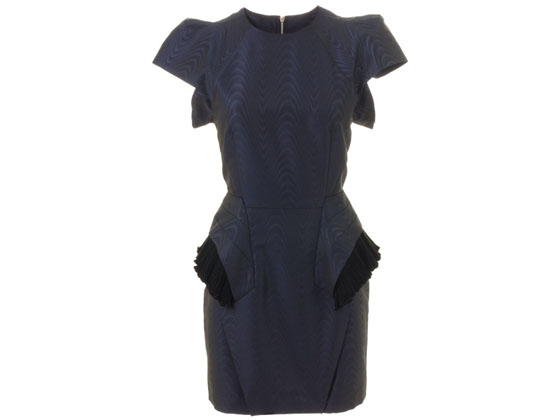