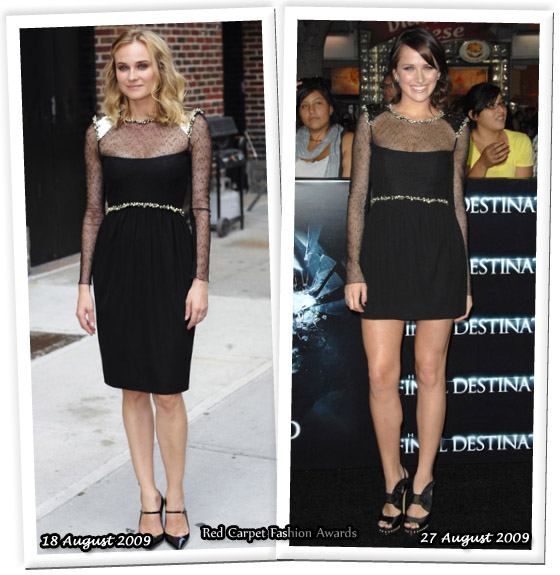 It’s not easy following in Diane Kruger’s footsteps, but actress Shantel VanSanten was brave enough to when she walked the red carpet at “The Final Destination” LA premiere last week.

Shantel wore the same – but shortened – Chanel dress which Diane had worn the previous week when promoting “Inglourious Basterds” on “The Late Show With David Letterman”.

The black dress with the black sheer yoke and sleeves is embellished with ivory pearls plus gold paillettes decorated the shoulders.

Last week I loved Shantel’s shorter version and immediately wondered why Diane – who loves a short hemline – didn’t opt for the shorter version, but I guess that was because she making a TV appearance and not walking the red carpet.

Now seeing them side by side I appreciated the sophistication of the longer version more so Diane wins for me.

Best Dressed Of The Week – Katie Cassidy In Brian Lichtenberg

Posted by Catherine Kallon on August 31, 2009 In: Chanel, Diane Kruger, Shantel VanSanten, Who Wore It Better?