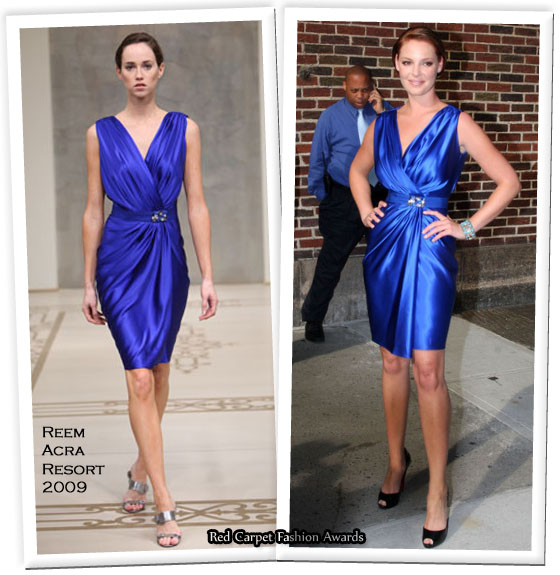 Katherine Heigl was voted Best Dressed by the majority of you last week wearing Lanvin, and it looks like she may also get your vote this week.

For her appearance on the “Late Show With David Letterman” she looked beautiful wearing an electric blue Reem Acra Resort 2010 dress.

I love the way this dress elegantly wraps around her body with the jeweled detail on her waist, but I’m not crazy about the black peep-toes. Silver strappy sandals would have worked better for me.

Also the cuff feels a little out of place, the jewel belt was enough bling for this look.

Katherine was on the show to promote her upcoming romantic comedy, “The Ugly Truth”.

The film is about a romantically challenged morning show producer (Heigl) who’s reluctantly embroiled in a series of outrageous tests by her chauvinistic correspondent (Butler) to prove his theories on relationships and help her find love.” Co-starring Gerard Butler, the Robert Luketic directed film will be shown in US theaters this Friday.

‘TrevorLIVE LA’ For The Trevor Proje...

Runway To Amy Adams To Net-A-Porter