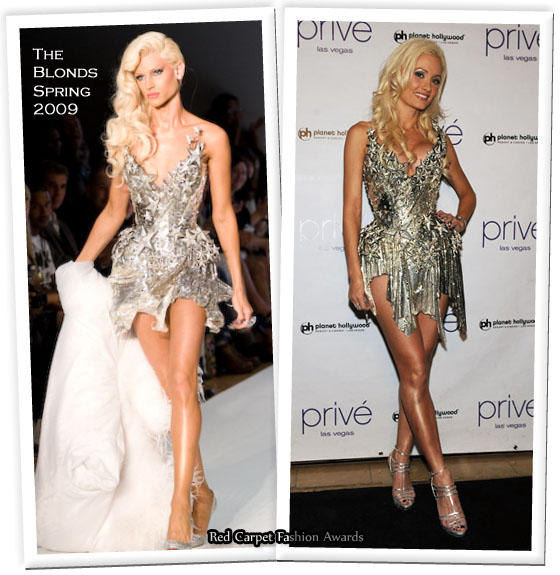 Prior to attending Kendra Wilkinson’s wedding at the Playboy mansion, Holly Madison was in Vegas on Friday night.

The ex-girlfriend of Hugh Hefner had a party thrown in her honour, to celebrate becoming the newest headliner for the Las Vegas “Peepshow” along side Melanie Brown.

Holly arrived on the red carpet wearing the jewel in the crown of The Blonds Spring 2009 collection – a silver crystal and starred bustier with a silver lame jagged skirt.

You may recognise this dress from the artwork within Britney Spears Circus CD, plus they also created many of the costumes worn during her most recent tour.

The duo are recognized worldwide for their signature pieces – corsets. Which are usually adorned with Swarovski crystals, chains and spikes.

They have worked with many other celebrities including Katy Perry, Beyonce and Rihanna.

Start Back Strong With 50% Off Nike

Posted by Catherine Kallon on June 29, 2009 In: Blog, Holly Madison, Runway To Red Carpet, The Blonds