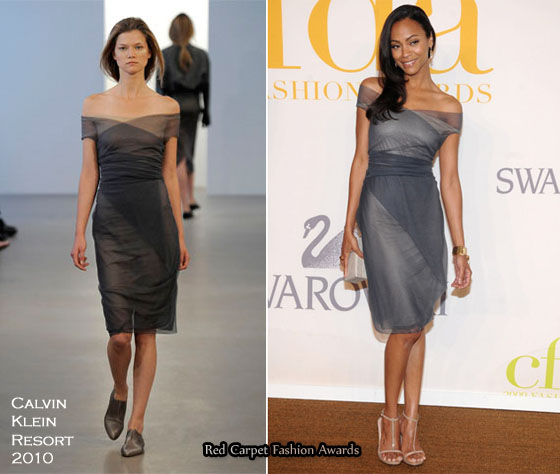 Best Dressed Award
Zoe Saldana continues to impress me. “Star Trek” has push her in the limelight, but her great choices in on the red carpet increase her star status.

Take this Calvin Klein Resort 2010 grey dress for example. It was plain and quite boring on the runway, but Zoe brings it to life.

She makes it sexy and sassy without much effort. 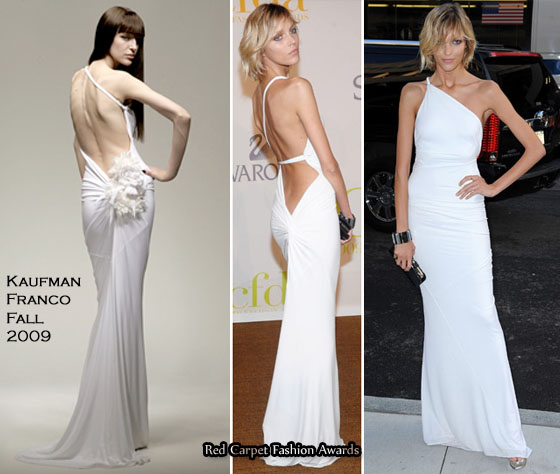 Did It Hurt When You Fell From Heaven? Award
*Sighs*

Could Anja Rubik be anymore beautiful? Anja and Halle Berry should be allow to walk amongst us normal folk.

She wore the gown without it’s ruffled detail on the behind, which showed how dangerously low the dress was cut.

On some this would have been deemed trashy, but on Anja *sighs* just damn sexy. 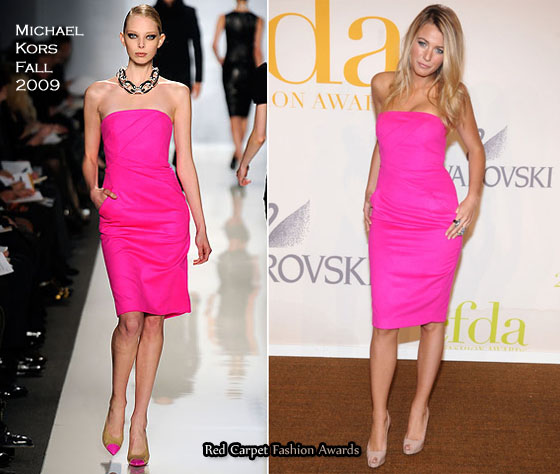 Best Use of Colour Award
There’s always a 50/50 split when it comes to Blake Lively.

I hope when you see her looking drop dead gorgeous wearing this neon pink Michael Kors Fall 2009 strapless sheath dress, more of you will be swayed to liking her.

Her twins aren’t on display, she looks youthful, vibrant and sexy.

What’s not to love? 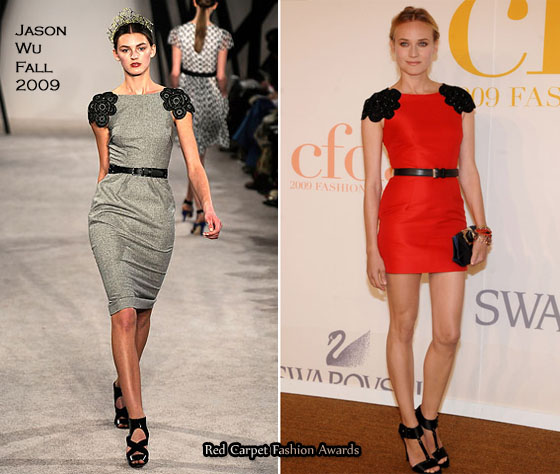 Best Modification Award
Jason Wu really understood his muse for the night, as he took this sophisticated business-like runway dress and turned it into a sexy mini for Diane Kruger.

Diane would look great in a bin liner lets face it, but the colour, length, fabric and embellished embroidered shoulders really looks amazing on her.

I hate to be picky but I really wish she would change her hairstyle more often. I feel like we see this style a lot. 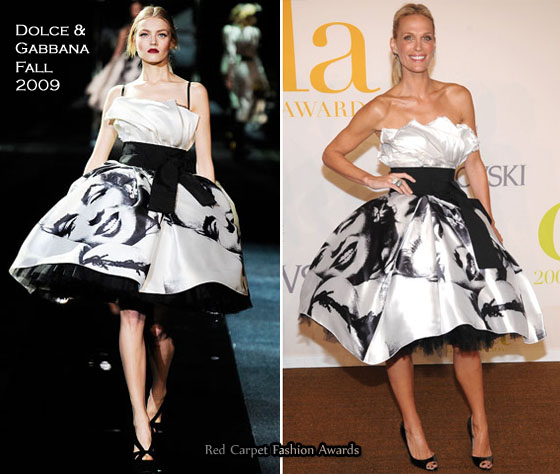 Model Magic Award
Many of you who loved the Dolce & Gabbana Fall 2009 collection were non to happy when Rihanna arrived at the Met Gala wearing a black suit from the collection.

Molly Sims should bring that enthusiasm back because she looked so cute and playful wearing a Dolce & Gabbana Fall 2009 strapless dress, with a Marilyn Monroe print emblazoned on it. 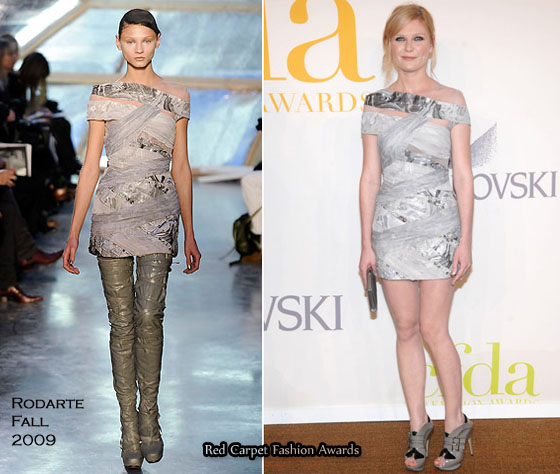 Risk That Paid Off Award
This is a rare red carpet outing for Kirsten Dunst.

The actress always opts for bold pieces which don’t always work, but on this occasion she looks amazing.

Rodarte is never a safe choice. The pieces are bold, edgy and dynamic plus you need the right kind of attitude to pull a Rodarte piece off.

She totally does with grey Nicholas Kirkwood heels. 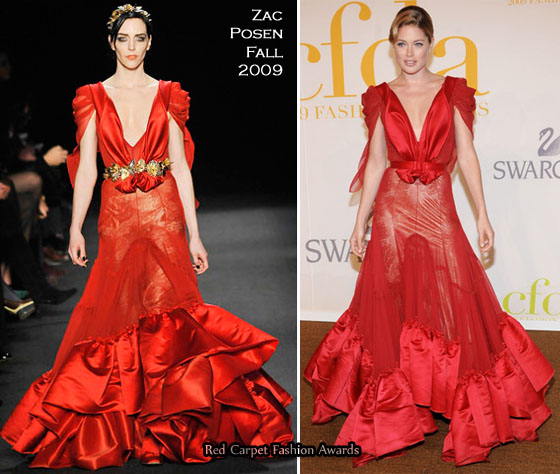 Most Theatrical Award
At first I really disliked Doutzen Kroes in this red Zac Posen gown, mostly because I thought it was too grand for her. Plus I’m so used to seeing her in Herve Leger I didn’t quite think it was her style.

Then I realised how much better the dress looks without the gold belt, and appreciated the way she had made an effort to make the gown work for her. 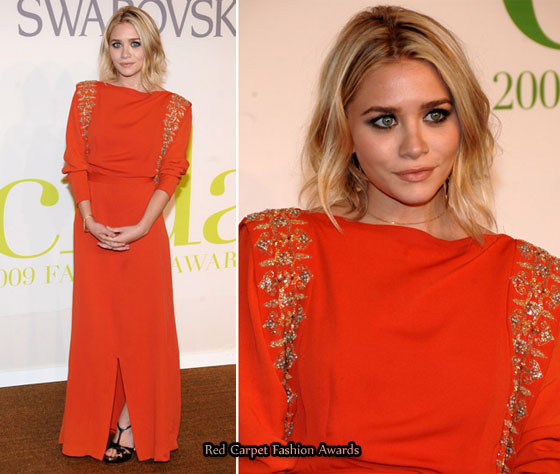 Best Vintage Award
As much as I appreciate the Olsen twins picking interesting vintage pieces, I would love to see them in something off-the-runway more often.

Ashley Olsen wore an orange vintage gown with gold leaf embroidery around the shoulders. Her look was complete with Van Cleef & Arpels jewels and Versace heels.

Some might say it’s a little too big for her. I would say it’s better than a bandage dress. 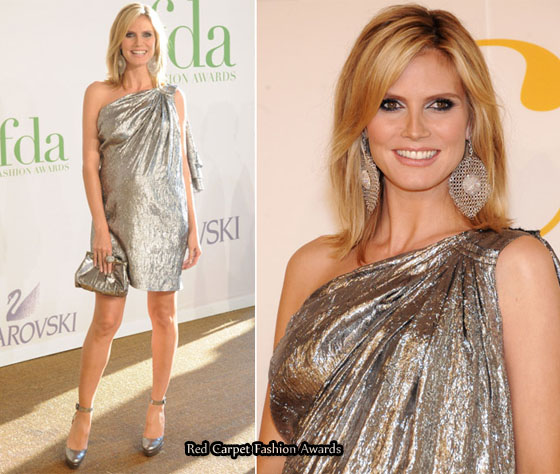 Glorious Glow Award
Even if Heidi Klum wasn’t pregnant and wearing a silver crushed lame Michael Kors asymmetrical mini dress, she would still glow. So these added elements only make her more beautiful.

Her silver Christian Louboutin Anthracite Ole Ole heels and clutch matched her dress, but it’s her earrings I’m drooling over. 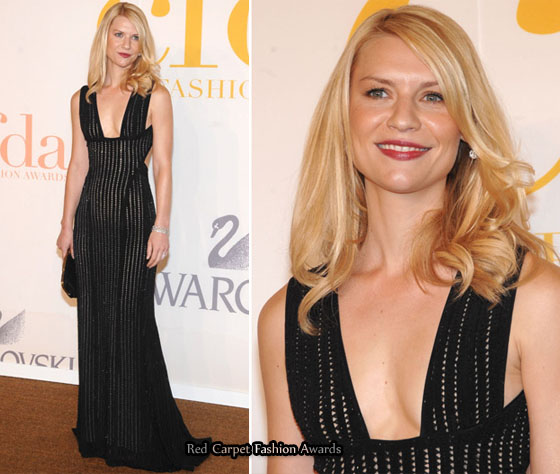 Best Black Award
Claire Danes is never one I can get excited about on the red carpet, but I do love her quiet elegant style. Some would call it boring, for me is very understated.

The actress looked elegant wearing a black Narciso Rodriguez embroidered black silk crepe gown which was cut low at the front and open at the back. 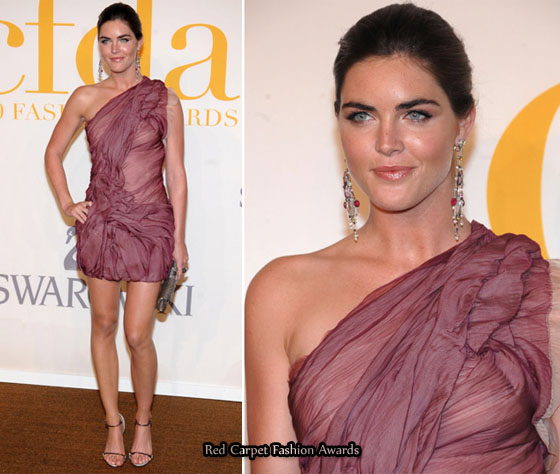 If you got it flaunt it honey.

Her look was completed with her hair pulled back in a tight bun and a VBH clutch. 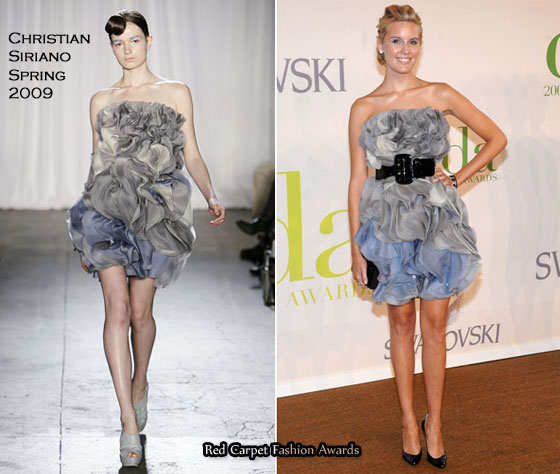 Stepping Out Of Her Comfort Zone Award
Maggie Grace is usually very boring on the red carpet, so imagine my surprise to see her wearing this Christian Siriano Spring 2009 grey ruffled confection.

Every time I see a variation of this dress on the red carpet it’s belted.

It would be nice to see it without a belt if its worn again in the future, but the belt does work for Maggie here. 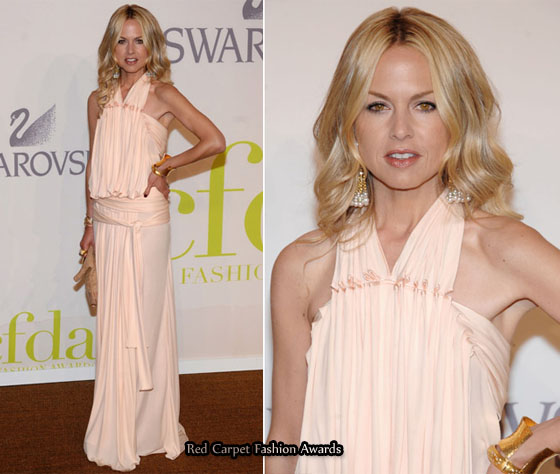 Best Accessories Award
Stylist Rachel Zoe arrived wearing a Louis Vuitton peachy gown, which I first thought was a Marc Jacobs gown as it resembles the finale gowns that were presented in the Spring 2009 collection, but her twitter message confirm that it’s Louis Vuitton. 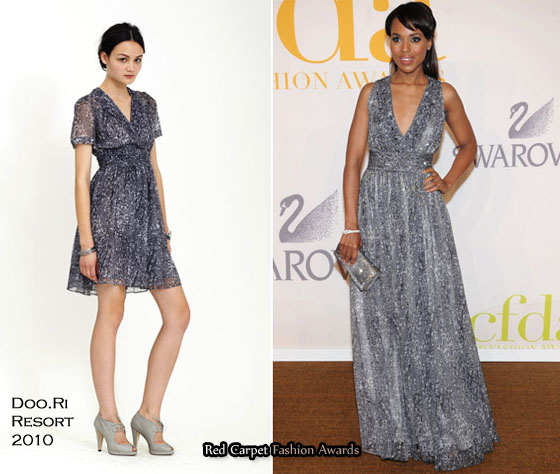 Simple Yet Always Elegant Award
Kerry Washington has opted for a lot of bold choices lately wearing Louis Vuitton edgy ensembles, so it’s nice to see her bring her look back to a softer more elegant style we usually associate her with.

Her jewels were also simple and she opted for a matching silver Swarovski clutch. 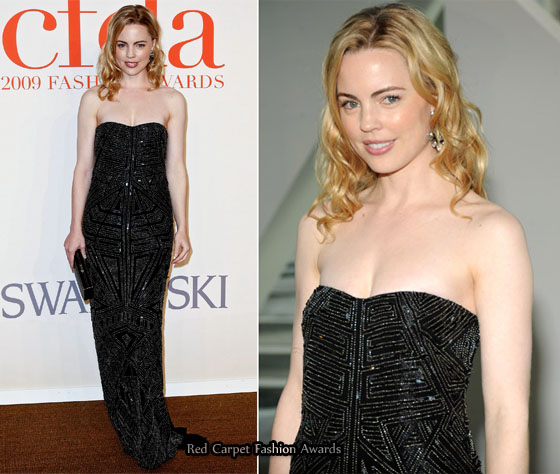 Best Embellishments Award
Whist Melissa George’s Nicole Miller gown has no shape, I am totally captivated by the embroidered crystals on her strapless gown.  Exquisite. 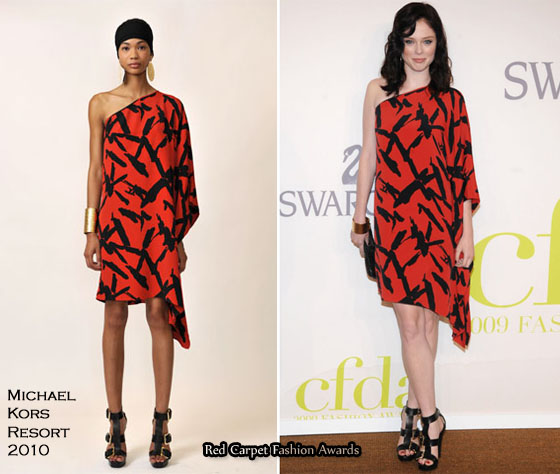 Black to Black Award
Yes I’m referring to Coco Rocha hair, which she debut on her blog a few weeks ago.

Her look was paired with a gold cuff, black strappy sandals and a matching clutch. 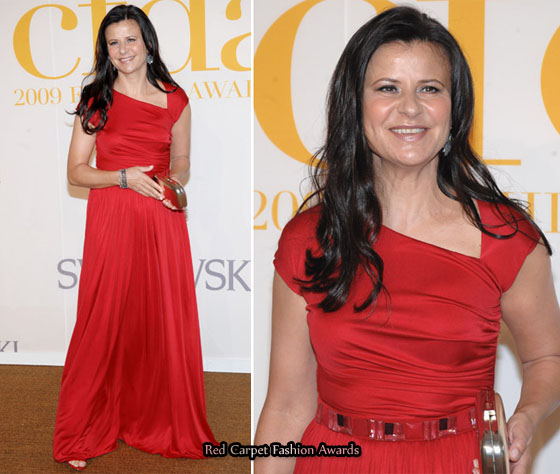 The Wow Moment Award
Comedian Tracey Ullman really shocked me when I saw her in this glorious red Doo.Ri gown with an asymmetrical neckline.

I don’t think I have ever seen her look so fabulous. 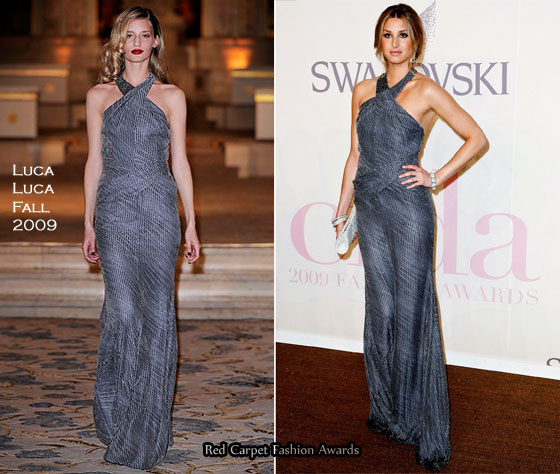 The draped silver beaded gown sparkled so beautifully. She really out did herself here. I’m totally wowed by her

Ashley Olsen and Mary-Kate Olsen In The ...